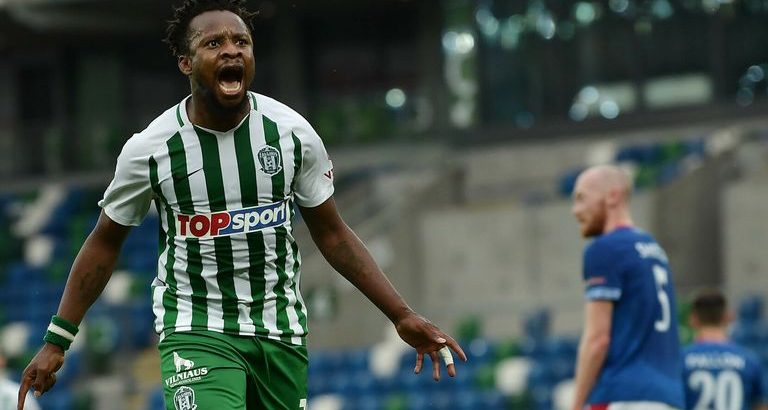 Both teams drop into the newly-formed Europa Conference League following second-leg defeats to Slovan Bratislava and Zalgiris Vilnius respectively in the first round of qualifying for the 2021/22 competition.

Behind 2-0 after the first leg in Slovakia, Rovers got themselves level on aggregate by taking a two-goal lead at Tallaght Stadium.

However, it was not to be for the League of Ireland Premier Division club as Vladimir Weiss scored a vital away goal for Bratislava to make it 2-1 to the Slovakian team on the night and 3-2 on aggregate.

Linfield lost 5-2 on aggregate after going down 2-1 in the second leg at Windsor Park, with summer signing Chris Shields getting his first goal for the club with a second-half penalty.

Saulius Mikoliunas and Ogenyi Onazi had already scored for Vilnius by that point. The Lithuanian side had Elhadji Pape Diaw and Karolis Uzela sent off in the second half but it made no difference to the outcome.

Cluj profit after away goals scrapped

Cluj were the first team to benefit from the abolishment of the away-goals rule in UEFA competitions.

The Romanian champions advanced to the second qualifying round with an extra-time goal in a 2-1 loss at Borac Banja Luka that sealed a 4-3 win on aggregate.

Under the old system scrapped by UEFA last month, the champions of Bosnia-Herzegovina would have gone through with the aggregate score tied at 3-3 because of the goal they scored in the first leg in Romania.

Instead, the game went to extra time and Cluj scored the decisive goal in the 118th minute.

The away-goals rule was introduced in 1965 to reward teams for scoring at their opponents’ stadium when international trips were typically more tiring, intimidating and tactically challenging.

UEFA believed the rule became outdated and inhibited home teams from attacking for fear of conceding a goal.

Cluj will next play Lincoln Red Imps of Gibraltar who beat Fola Esch of Luxembourg 5-0 to seal a 7-2 aggregate win.

Ferencvaros, who played in the group stage last season against Barcelona and Juventus, also advanced from the first qualifying round. A 3-1 win in Kosovo against Prishtina made it 6-1 on aggregate.

Winners enter the third qualifying round on August 3/4 & 10, with the draw for that round held on 19 July.