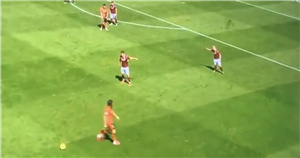 Charlie Mulgrew scored the only goal of the game as Dundee United beat Arbroath during their Scottish League Cup clash on Saturday – and his strike was one to remember.

The former Celtic and Blackburn defender combined with colleagues to catch the opposition defence and goalkeeper off guard, with a technique that many had never seen before.

The 35-year-old, who played for United on loan from Celtic back in 2006, joined on a two-year deal in June following loan spells with Wigan and Fleetwood.

With one supporter jokingly comparing the former Scotland skipper to Zinedine Zidane, DUTV's co-commentator admitted that he had never seen the technique before.

He said on the broadcast: "This is a new one on me, a couple of step overs here, stalls, stops.

Before adding: "I don't think (Arbroath goalkeeper) Derek Gaston will be too happy."

Mulgrew said on Twitter: "Good win yesterday and 15 years since my first goal for @dundeeunitedfc delighted to be back."

With one supporter saying: "The Scottish Zidane."

Will Rangers retain their Scottish Premiership crown this season? Give us your thoughts in the comments section

A third continued: "Could open a tin of beans with that left foot."

With a fourth saying: "Love to see it. One of the best blackburn have seen at free kicks."

With a fifth concluding: "Cracking goal. Hopefully not 15 years to the next one."

Head coach Tam Courts later said: “It was a great strike from Charlie. And I must give a lot of credit to Liam Fox and the players. They do a lot of work on their set-piece preparation.

“That’s actually two of our three games where we’ve no scored from set-pieces. They’ve been worked routines. So congratulations to them for that. Overall, we’re very pleased with the outcome.

“Arbroath are probably the nemesis for most full-time teams. They are a match for anyone on their day.

“I thought we were terrific. The goal we scored came at a great time and we then had to show some resilience towards the end. “But that’s two clean sheets in three games which is another positive.”