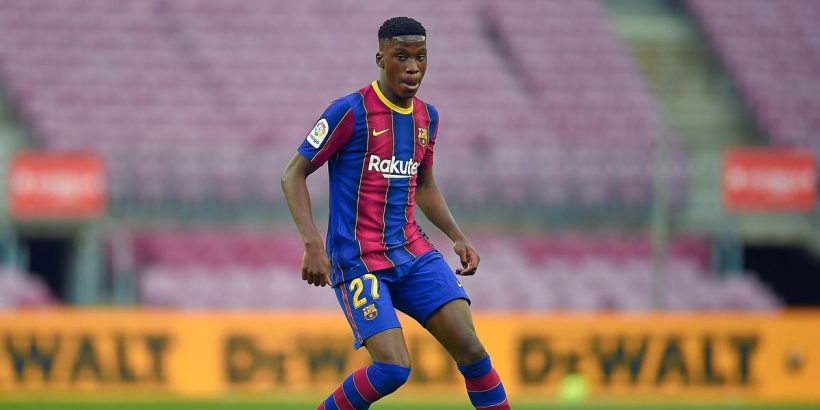 Chelsea are believed to have taken the front foot in the race to land Barcelona midfielder Ilaix Moriba this summer with a rumoured approach having been made to the Spanish youth international.

Moriba has been removed from Ronald Koeman's first team squad after rejecting a new contract at the Nou Camp with his current deal due to expire at the end of next season.

Sport.es are reporting that the youngster has been upset by this decision and Premier League and European clubs are now said to be circling in an attempt to land the services of the La Masia graduate.

Chelsea and Manchester City are believed to be the frontrunners for Moriba's signature, who was born in Conakry, Guinea in 2003 before later moving to Spain.

City are rumoured to have already tabled a contract offer to Moriba, who has a release clause worth £86milllion, with the deal said to be worth £5.2million a year.

Would Ilaix Moriba be a good addition to Thomas Tuchel's Chelsea side for next season? Let us know in the comments section below.

This comes after both City and Chelsea approached Moriba in 2019 prior to him signing his first professional contract with the Blaugrana.

In fact, only a late change of heart prevented him from moving to the Etihad, as his father and agent, Mamady Kourouma, explains: "We met with Txiki Begiristain [City's sporting director] and he explained his entire project to us.

"We liked it because they bet a lot on him. A few weeks later we had the tickets to travel to Manchester and sign the contract."

However, the chance to be an example to those in La Masia proved too much for Moriba and his family: "I cancelled it the morning that we had to go there. I wanted Ilaix to be an example and a reference for the next generations of Barcelona."

Moriba became a permanent member of the Barcelona first team in March, after making his debut in January just two days after his 18th birthday.

He went on to make 18 appearances last season, scoring once and providing three assists as Barca won the Copa del Rey in April.

Moriba is one of a number of players likely to leave the club this summer, with Barcelona struggling financially and needing to cut their wage bill to meet La Liga salary cap regulations and free up funds for Lionel Messi's new contract.

So far the club has only signed players on free transfers and they have also sold youngsters Junior Firpo, Jean-Clair Todibo and Carles Alena already.