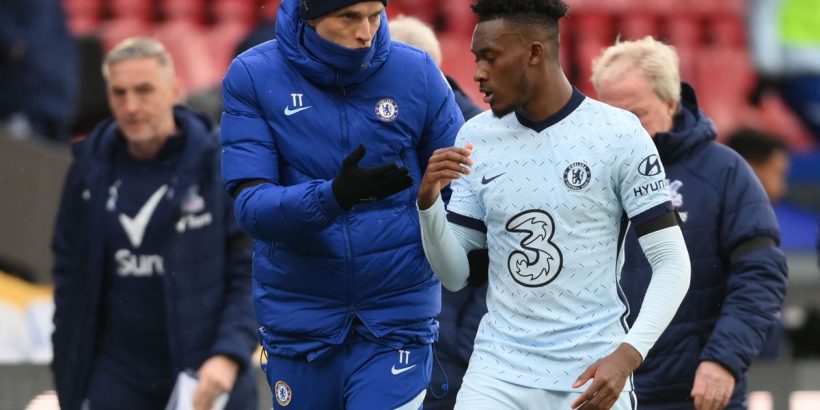 Thomas Tuchel could not care less if half of Europe wants Callum Hudson-Odoi – because he plans to make him a star at Chelsea.

Hudson-Odoi snubbed interest from Bayern Munich to sign a new contract with the club in February 2020 but has found playing time limited under Tuchel.

And the Blues boss was spotted shoving him in the back and giving him coaching tips after he came off the bench to help them beat Manchester City 2-1.

Asked what he thought of the 20-year-old being in demand, Tuchel said: “No matter if he’s in talks all around Europe or not, that is not of interest to me.

“Everything that counts is what he does here and how he lives up to his talent that he clearly he has. We were very happy with Callum since we arrived here.

“This is the thing he needs to learn and live up to. Once he does this, he will make his way and leave his footprint…”

Hudson-Odoi has not featured for Chelsea in the Champions League since March when he came off the bench against Atletico Madrid in the last 16.

And his 14-minute cameo against City was his first appearance in the Premier League in three games.

But Tuchel claims the decision to sideline the England forward in favour of Reece James and Cesar Azpilicueta has been purely tactical. He said: “In the last weeks there were a few tough decisions against him because we played many times against a back five.

“Against a back five, we relied a bit more on really learned defensive guys like Azpi and Reece, who are a bit stronger in defence.

“On the inside position where he played against Man City, this is maybe his best position, we agree on that.

“And the big change and the big impact he had now when we brought him on was that it was not only one action that he had, but it was two or three accellerations.”

Tuchel wants more end product from Hudson-Odoi, who has five goals and five assists this season and has played as wing back and an inside forward since his arrival.

He said: “It's about his position. It's about assisting, it's about scoring, it is about that, we don't need to talk around it. It's about putting things to an end.

“When we have a chance we let him play. Please don't forget we only have three changes here in England which is a big disadvantage for the guys like Callum.

“We cannot give them 20 minutes here and there which could make a huge, huge difference for their feeling and development.

“If you have only three then subs you more or less only have two because the last one is a bit of a risk for injuries and finishing the game with ten people.”