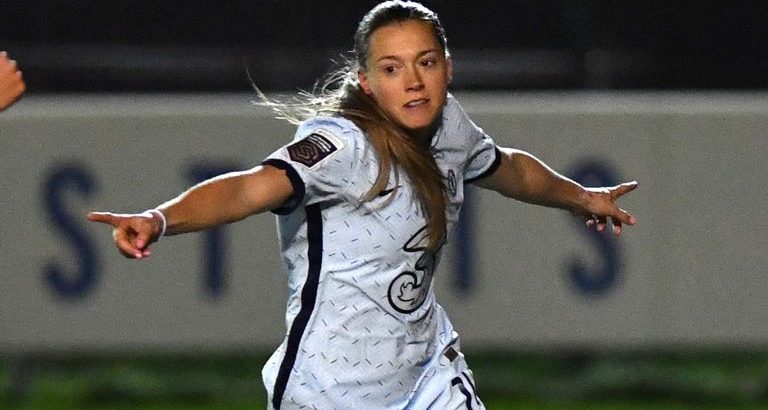 Women’s Super League leaders Chelsea followed up their Continental Cup final victory with a 3-0 win over Everton to stay two points clear at the top.

Fran Kirby opened the scoring for Chelsea in the 13th minute and Denmark international Pernille Harder made it 2-0 in the 59th minute.

Melanie Leupolz netted Chelsea’s third in the 79th minute, tapping in after an attempted lob by Harder was parried away by Everton goalkeeper Tinja-Riikka Korpela. An assist from Chloe Kelly saw Scotland international Caroline Weir open the scoring for City in the 12th minute at Twerton Park.

Ellen White slotted in a perfectly-weighted low cross from Lauren Hemp in the 30th minute and Sam Mewis headed home a late third as Gareth Taylor’s side remain two points behind Chelsea. Brighton registered their fourth straight win with a 2-0 victory at relegation-threatened Aston Villa.

Aileen Whelan forced home a first-half opener and Inessa Kaagman converted a late penalty after Kayleigh Green had been brought down.

Brighton are sixth, while Villa have lost their last three league games without scoring.

📊 Here is how the table looks after tonight's fixtures!

It's getting tight at the bottom! 😬#BarclaysFAWSL pic.twitter.com/Lr5rfVBpSw

The home side looked set for victory after second-half goals from Emily Van Egmond and Katarina Svitkova had cancelled out Emily Murphy’s early opener for Birmingham.

But West Ham could not hang on to secure Olli Harder a first win in charge as Mace tapped home Sarah Mayling’s cross to snatch a dramatic late point for the visitors.