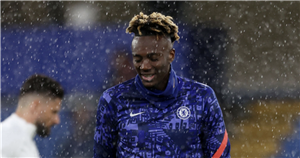 West Ham are reportedly among a list of Premier League clubs interested in signing Tammy Abraham from Chelsea this summer, but a loan deal may be their only realistic option.

That’s due to the £40million valuation Chelsea are understood to have put on Abraham’s signature, which could deter the likes of Leicester, Aston Villa and Newcastle in their pursuit.

The England international doesn’t look as though he’ll play a part in Thomas Tuchel’s future plans after making just four starts since the German replaced Frank Lampard in January.

The Athletic reported West Ham are still targeting a summer deal despite David Moyes insisting Abraham’s price-tag is too high. Asked about the forward’s alleged valuation and his side’s interest in the player, the Hammer boss replied: “It would rule us out completely.

“We will be ruled out. So if that’s the figure and that’s what’s being said, we are ruled out.

“‘I don’t think we will be making a purchase of that for any one player. I’d be surprised if we were.”

Abraham was a frequent fixture in the Blues XI during the first half of this season, even after Timo Werner and Kai Havertz completed moves from RB Leipzig and Bayer Leverkusen, respectively.

However, the Chelsea academy product has barely featured since Tuchel arrived at Stamford Bridge. Abraham is yet to feature in six Champions League games under the German, while his strike against Barnsley in the FA Cup is his only goal since Tuchel took charge.

The 23-year-old attacker has 12 goals in all competitions despite making only 18 starts this season (32 appearances overall).

Chelsea are also believed to be considering more offensive upgrades this summer, with Robert Lewandowski, Erling Haaland and Romelu Lukaku each said to be on their radar.

West Ham are thought to be keen on signing an attacking alternative to Michail Antonio after Sebastien Haller left for Ajax during the January transfer window.

Jarrod Bowen has been fielded as a centre-forward alternative at times this season, but Moyes has used the former Hull City standout mostly out wide.

According to The Athletic, the Hammers hope Abraham’s other suitors will be similarly reluctant to pay his supposed price-tag, improving their chances of a temporary deal.

The south London native previously spent time on loan at Villa and helped the club gain promotion to the Premier League in 2018/19, scoring a joint-career-high 26 goals in 40 appearances.

West Ham lost 1-0 at home to Everton on Sunday to all but end their chance of a top-four finish in the Premier League, but qualifying for next term’s Europa League is still a firm possibility.