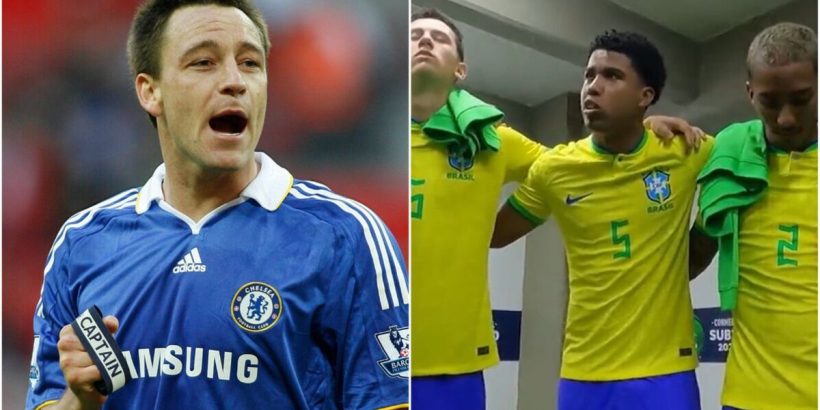 Chelsea boss Graham Potter may have recruited a future captain this month with fans encouraged by footage of Andrey Santos thriving on international duty. The Brazilian youngster, who recently signed from Vasco de Gama, scored a superb goal on Monday night before delivering a rousing dressing-room speech that sparked comparisons to John Terry.

The Blues were thought to have pulled off a smart signing when they agreed an £18million deal to snap up Santos early in the January window. The 18-year-old dazzled during his come-up with Vasco de Gama, with many tipping him for a bright future at club and international level.

Santos is yet to make his Chelsea debut as he campaigns with Brazil at the South American U20 championships. His performances have given Blues fans plenty to sink their teeth into as he scored an impressive solo goal and delivered a passionate speech during their 3-1 win over Argentina on Monday night.

With the Selecao already one goal to the good as half time approached, Santos picked the ball up just inside the Argentina half and showed an electric turn of pace to race towards the goalkeeper.

JUST IN: Tottenham boss Antonio Conte sends direct message to board over future after Fulham win

Leaving two defenders trailing in his wake, the teenager finished low into the far corner to double his side’s advantage. Chelsea boss Potter may have been even more encouraged by what he saw during the interval, however, as Santos’ rousing speech to his team-mates was caught on camera.

While gathering in a huddle, the Chelsea new boy said: “Our time has come. Now it’s time to put it on the field. Attention, everyone together. F*** whoever they put on the field. Next half you guys [substitutes] will come in and destroy them. Lets go together and achieve our dreams.”

Naturally, that led some to compare Santos to former Chelsea skipper Terry, who made more than 700 appearances for the club between 1998 and 2017. The Brazilian youngster has more maturing to do before he can lead an experienced dressing room at Stamford Bridge but the new footage has prompted excitement for the future, should Santos stay in west London for the long haul.

As has become a common theme during the early stages of co-owner Todd Boehly’s reign at Chelsea, the club have signed Santos to a long-term contract running until 2028. By that point, the former Vasco de Gama youth prospect should be approaching his prime, along with a host of other future stars to have recently arrived at the Bridge.

Boehly has brought in six major signings this month with Mykhaylo Mudryk, Benoit Badiashile, Noni Madueke, David Datro Fofana, Joao Felix and Santos all under the age of 23. Potter already has a host of prospects in his squad including Lewis Hall, Carney Chukwuemeka and Omari Hutchinson.

“It’s a very big opportunity for me,” explained Santos once his move to the Blues was confirmed. “This is a big club playing in big competitions like the Premier League so I am very excited. The players here are so good and I am very happy to be here.”