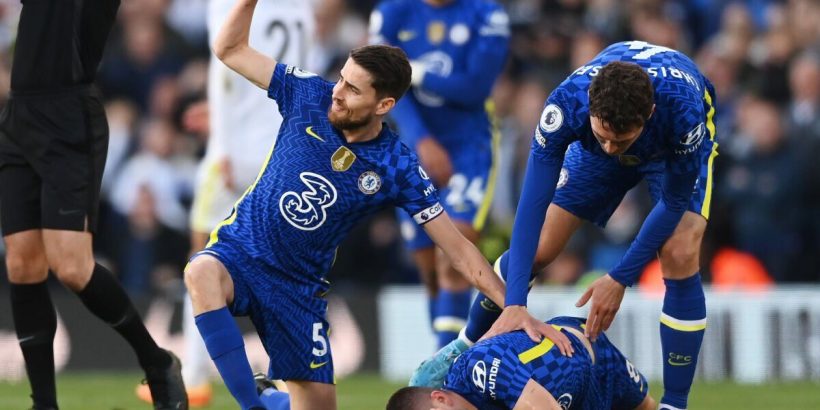 Chelsea manager Thomas Tuchel has offered a pessimistic update on the injured Mateo Kovacic after the midfielder was forced off in the 3-0 Premier League win at Leeds United on Wednesday night. Dan James was sent off for a reckless high-studs tackle on Kovacic after 24 minutes at Elland Road and the Croatian had to be substituted off shortly after.

Kovacic, one of the Londoners’ star performers this season, had started alongside Jorginho in Yorkshire and his injury is an untimely blow with the Blues taking on Liverpool in the FA Cup final at Wembley this Saturday (4.45pm).

And Tuchel admitted post-match it is unlikely he will be involved at Wembley this weekend as a result. The German admitted: “I tell you not as a coach or an expert, but I think it’s unlikely we will see him [at the weekend].”

Tuchel added when asked if he will be disappointed for Kovacic: “If Mateo misses it I am very disappointed because he was a clear starter. You saw the quality with Jorgi and him in midfield when it was eleven against eleven. We will see. Maybe we have a miracle.

“I did not see the challenge live. I just saw it from a distance and I’m not good at looking at these situations because it hurts me. Everyone told me it was a red card.”

Tuchel will be desperately hoping that N’Golo Kante, absent from the squad at Leeds, can prove his fitness for the final. Ruben Loftus-Cheek is otherwise the main contender to come into the starting line-up against Liverpool.

Goals from Mason Mount, Christian Pulisic and Romelu Lukaku meanwhile gave Chelsea a thoroughly deserved 3-0 victory at Elland Road and Tuchel continued: “We understood the game better and better when we were one man up in the second half. We didn’t give in. It was a good performance and a deserved win.

“We needed to step up, it was as easy as that. There were reasons we conceded late goals and equalisers. It was nothing new what we did today, but we did our stuff on a higher level and with more focus than in the last few matches.”

Chelsea are now just one point away from securing their spot in the Champions League for next season but the reigning world champions could have their top-four spot secured for them by Arsenal, if they get at least a draw away at Tottenham on Thursday night.