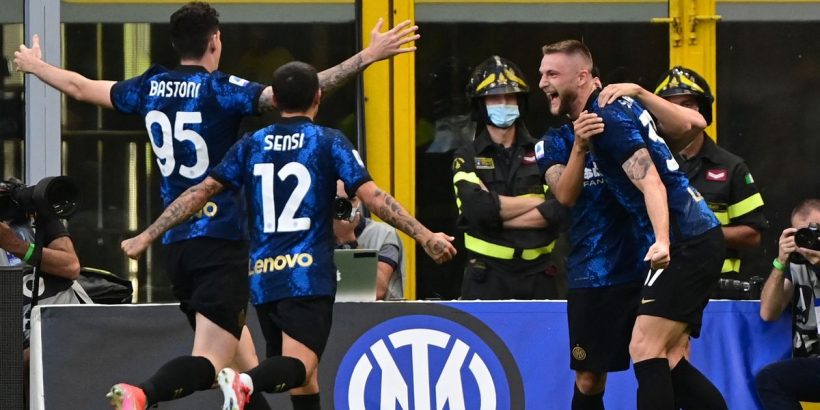 Chelsea are targeting moves for Inter Milan centre backs Milan Skriniar and Alessandro Bastoni according to reports coming out of Italy.

Sport Mediaset report that the Champions League winners are targeting the Inter pair due to a recommendation from Romelu Lukaku, who re-signed for the Blues from Inter this summer.

Chelsea were in the market for a new central defender this summer but ultimately failed to bring one in despite chasing Sevilla's Jules Kounde throughout the window.

Having agreed personal terms with the Frenchman and believing they had a verbal agreement with the Spanish side, Sevilla then raised their asking price by £12.8million.

Now, thanks to Lukaku's recommendation, Thomas Tuchel's side are believed to be exploring the possibility of bringing either Skriniar or Bastoni to Stamford Bridge.

Both players featured over 30 times in the league last season as Inter won Serie A for the first time in 11 years to break Juventus' run of nine straight titles.

26-year-old Slovakian Skriniar could represent a bargain signing next summer for Chelsea, with his contract expiring in the summer of 2023.

At the end of this season, with just 12 months remaining on his deal at Inter, Chelsea would be unlikely to have to pay the £54million he is valued at.

Do Chelsea need to sign a new centre back? Let us know your thoughts in the comments section below.

Having joined Inter in 2017 from Sampdoria in 2017 for £30million, Skriniar has gone on to make 170 appearances for the club and attract interest from Premier League clubs as well as Real Madrid.

As for Bastoni, who is four years Skriniar's junior, he would likely cost considerably more despite being less experienced with 76 appearances for Inter to his name.

He also moved to the San Siro in 2017, arriving from Atalanta for £28million before being loaned back and then having a season on loan at Parma.

The Italian international won the Euros in the summer and has three years left on his contract after signing an extension as recently as May of this year. The Inter pair are not the only potential targets for the Blues at the centre of defence, though, with the position Tuchel's next priority for strengthening after bringing in a striker and midfielder in the summer.

Juventus' Dutch defender Matthijs de Ligt has also been linked with the club in recent days, but they would face competition from Spanish giants Real Madrid for his signature.