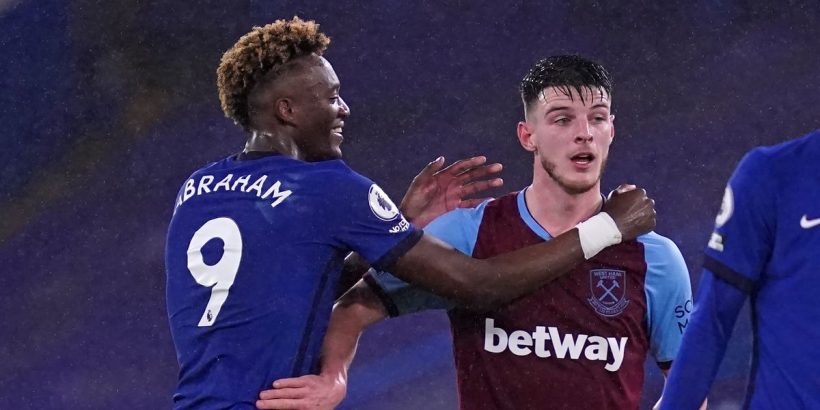 European champions Chelsea are planning to include striker Tammy Abraham as part of a deal to sign West Ham United midfielder Declan Rice this summer.

According to The Athletic, Chelsea director Marina Granovskaia wants to bring former academy player Rice back to the club after eight years away and is open to using Abraham to lower the cost of the deal.

Last season's top scorer Abraham has been made available for transfer this summer despite finishing tied with Timo Werner on 12 goals in all competitions, but only featured seven times for The Blues after Thomas Tuchel's appointment in January.

Rice departed Chelsea's academy for West Ham in 2013 at the age of 14 and The Hammers now value him at £100million after featuring 35 times for the club last season and starting all seven of England's matches at EURO 2020.

Now 22, Rice has made a total of 145 appearances at the London Stadium since making his debut in 2017 and has scored a total of five goals for the club so far.

He has a close relationship with Chelsea starlet Mason Mount, after the pair played together for the club as kids and now for England, they are often spotted together during their downtime and are currently on holiday with fellow England teammates.

Where will Declan Rice be playing his football next season? Leave your answers in the comments section below?

Therefore, it comes as no surprise that, according to Eurosport's Dean Jones, Rice is keen on a return to Stamford Bridge this summer.

Speaking on The Football Terrace podcast, Jones confirmed that "Chelsea are definitely going to go to West Ham and say what's it going to take? They're going to do it because they want to know.

"Even if they don't decide to pursue it after that point, they need to get the ball rolling, they need to know how possible it is and they know that the player wants to come."

As for Abraham, Chelsea believe including the England forward in the deal could shave £30-40million of the total price tag, with West Ham said to be amongst a number of potential Premier League suitors for the 23-year-old.

Since being made available for transfer this summer, David Moyes' side have expressed an interest in the former Bristol City loanee, along with the likes of Aston Villa and Newcastle United.

Abraham boasts an impressive goal-scoring record, with 30 strikes in 82 Chelsea appearances and a total of 91 professional goals in 215 appearances for Chelsea, Bristol City, Aston Villa, Swansea City and England.