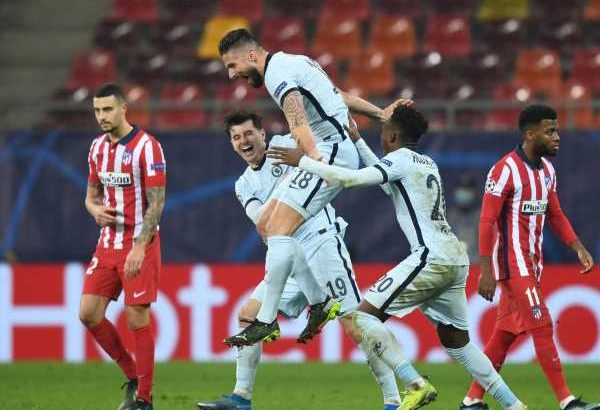 The Frenchman’s impressive improvisation means Thomas Tuchel’s side are favourites to advance, though Diego Simeone’s side are sure to fight to the end to salvage the situation.

FOLLOW LIVE: Teams, build-up and all the action as Chelsea host Atletico

A goalless draw at Leeds last weekend has highlighted the Blues’ difficulty in the final third, despite extending their unbeaten run under Tuchel, while the Spaniards played out the same scoreline against 10-man Getafe ahead of the trip to London.

Tuchel anticipates a similar test to the first leg in Bucharest, while describing the Spaniards as “complete”: “I expect more or less the same as in Bucharest.

“They have Trippier, Carrasco and Gimenez back. Lemar, Llorente available in the half positions that changes the approach but in general I expect more or less the same.

“A team that is hard to play against, find spaces behind the last lines and for sure super hard to create chances against.

“I believe that every club has its DNA and characteristics. With Simeone they are one of the toughest teams to beat, this is their characteristic, discipline and hard working, organised defence. They have incredible quality to attack and to play a possession game, they are a complete squad.”

Here’s everything you need to know about the Champions League tie:

When and where is it?

The game will kick off at 20:00 GMT at Stamford Bridge, London.

The match will air live on BT Sport, and subscribers can also stream it live on the broadcaster’s website and app. Coverage for this game begins at 19:00 GMT on BT Sport 2.

This is finely poised and may play games with the instincts of both managers, the way Tuchel has shuffled the pack in recent weeks has been designed to maintain high intensity throughout this testing schedule. If they can hold off a charge from El Cholo’s side, it will likely legitimise dismissing Frank Lampard, if it hasn’t already. Atleti are unbeaten in four since the Chelsea defeat, including a win at Villarreal and a stalemate with rivals Real Madrid. We expect them to be able to score at the Bridge, given the urgency required relating to the tie as a whole and their deficit, but we’ll lean towards a 1-1 draw on the night and the hosts edging through to the last eight.