Chelsea Women have won their second successive Women’s Super League title, with Manchester City Women ending as runners-up for a fourth season in a row.

Emma Hayes’ side were awarded the title last season after the WSL was decided on points-per-game, despite Man City leading when the league suspension was announced.

But there was no doubt this time around as Chelsea capped an incredible season with a 5-0 victory over Reading to retain the title, this time doing so with a two-point gap over City.

It was a title race that went down to the wire with Chelsea hosting Reading at Kingsmeadow, while Man City were a short distance away in east London, facing West Ham on the final day.

Chelsea took an early lead through Melanie Leupolz, with Man City desperately attempting to match their rivals’ fast start – Sam Mewis had a penalty saved in the first half, while Caroline Weir hit the crossbar and had an effort at an open goal saved at the final moment.

Chelsea striker Fran Kirby then added a double either side of the break before Sam Kerr secured the Golden Boot soon after, putting Chelsea firmly in control of the title race.

Ellen White fired home her 10th goal of the season soon after, ultimately securing a 1-0 win for Man City over West Ham at Victoria Park, before Erin Cuthbert’s effort wriggled over the line for a Chelsea fifth.

Man City had another late penalty saved by West Ham goalkeeper Mackenzie Arnold – this time from Rose Lavelle – with Gareth Taylor’s side ending up in second place for yet another season.

It has been a sensational 2020/21 campaign for Hayes’ Chelsea. Their latest WSL title sees them overtake Arsenal for the highest number of wins in the league (4), having also secured the Women’s League Cup earlier this season.

Their attention will now turn to next Sunday, when Chelsea take on Barcelona in their first Women’s Champions League final. Victory in Gothenburg could see them end the season with three major trophies added to their growing collection, with the Women’s FA Cup also yet to be decided.

The WSL will have a new home from September, with Sky Sports showing at least 35 games exclusively live per season as the league’s new primary broadcaster. 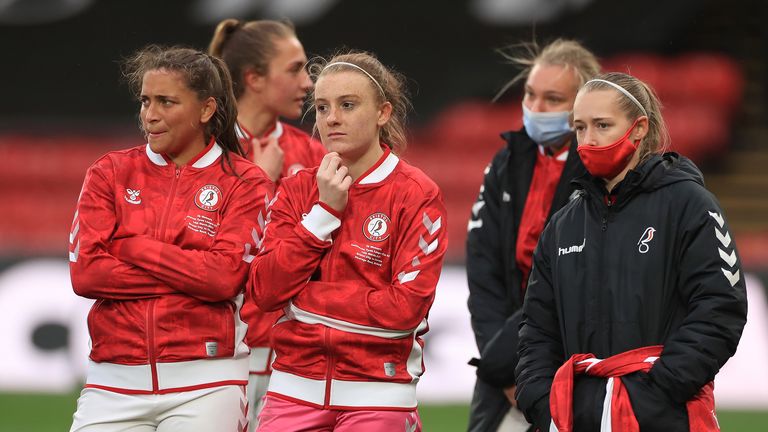 Bristol City’s relegation from the WSL was confirmed after a 3-1 defeat against Brighton, ending their four-year stay in the WSL. They finished the season with just two victories and have conceded the most goals in Women’s Super League history (72).

Leicester will be taking their place in the WSL next season, having won the Women’s Championship title with an impressive eight-point gap over Durham. It will be the first time the club have competed in the women’s top tier and they are a fully-professional side, having been bought by Leicester City’s owners, King Power, in August 2020 and integrated into the club.

“We’re so excited to get into the WSL and play against some of the best teams in the world and see what we can do,” Leicester manager Jonathan Morgan told Sky Sports News.

“The women’s game has gone from strength to strength across all the leagues and is getting far more competitive.

“From our point of view, we’re very much aware of how competitive the league is and we just want to go in and consolidate ourselves and give a good showing.

“The girls have worked phenomenally hard this year to get this opportunity and pit themselves against the likes of Chelsea, Manchester City, Arsenal – it’s a fantastic achievement.”

How Chelsea won the WSL title

Chelsea began the season in sensational fashion. In their second game of the season, they thrashed Bristol City 9-0 – the biggest home win of the season.

In October, they beat Man City 3-1 in their first WSL encounter of the season, before drawing 1-1 with Arsenal the following month.

Over the festive period and into 2021, Chelsea continued to rack up the wins, including two 4-0 victories against Aston Villa and Tottenham and a 5-0 victory away to Reading.

But, in early February, trouble struck as Chelsea lost their only WSL game of the season against Brighton. Sam Kerr nodded the hosts ahead inside five minutes, but Aileen Whelan’s header levelled things up for the Seagulls before Megan Connolly’s goal from a direct corner handed Brighton the victory.

It ended an incredible run of 33 WSL games unbeaten – it had been over two years since Chelsea’s last defeat in the league – and also halted a 10-match winning streak for the Blues in all competitions. It was the first home defeat at Kingsmeadow since March 2019, having won all 14 games in that stretch.

But the sign of a good champion is how you bounce back from setbacks and it was certainly a brilliant response from Hayes’ side. Chelsea won and kept clean sheets in their next six WSL games, including big wins against Bristol City and Birmingham.

One of Chelsea’s final games saw them face title rivals Man City at the Academy Stadium, which ended in a 2-2 draw after Lauren Hemp’s late equaliser. The Blues then beat Tottenham 2-0 in their penultimate game on Wednesday evening.

Chelsea led Man City by two points heading into the final day and needed to match or better their rivals to lift the WSL trophy.

It was an emphatic win for Chelsea as they dismissed Reading 5-0 with the exact performance needed to clinch the trophy, while Man City’s 1-0 win at West Ham was academic. Kerr also ended the season with the WSL Golden Boot, while Kirby was also joint top for assists (11) and Ann-Katrin Berger registered the most clean sheets (12), winning the Golden Glove.

Chelsea into the history books

On their way to securing the league title, Chelsea also broke an array of WSL records.

Their win on Sunday earned them their fourth WSL trophy – overtaking Arsenal for the highest number of WSL titles (3) in the competition’s history. They also matched Arsenal and Liverpool for the most successive trophy wins (2).

Chelsea have also amassed the most points in a season (57), again overtaking Arsenal’s tally of 54 from their victorious 2018/19 season. Interestingly, Man City also beat that tally (55), despite finishing in second, and break their own record of points won without winning the league (47 from 2018/19).

Chelsea have again matched Arsenal for overall wins in a season (18), but were an agonising one goal short of the most scored in a season, again set by the Gunners in the 2018/19 campaign (70). 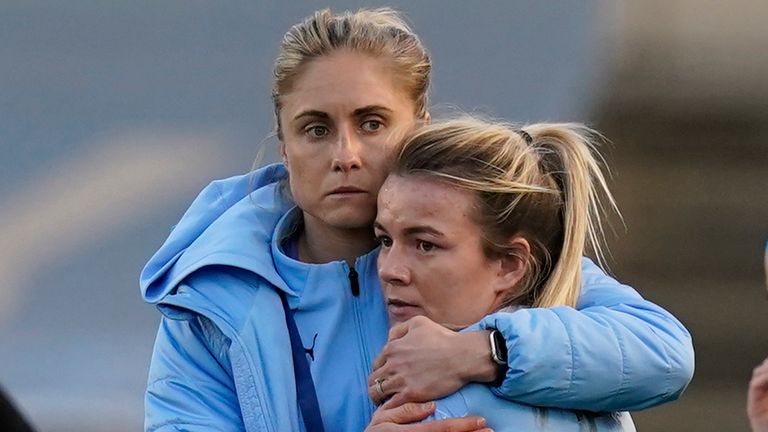 It is another ‘almost’ for Man City, who finish as WSL runners-up for a fourth successive season, and are as yet unable to match their 2016 title win.

They had been on course for the trophy last season, but after the league was suspended due to Covid-19, the WSL title was decided on points per game – placing Chelsea top and Man City into second.

Both sides have only lost one WSL game this season – Man City losing to Chelsea in October – but an extra draw for City (4) and one more victory for Chelsea sees them clinch the title.

Chelsea’s win at Reading also marked the final game of Fara Williams’ career, and she will surely be considered among one of the best players the WSL and England Women has seen.

She is the Lionesses’ most capped player (172) and since her international debut in 2002, has represented England in seven major tournaments. She was part of the team that finished third at the 2015 World Cup and were runners-up at Euro 2009. The midfielder also played for Team GB at the 2012 Olympics.

Williams started out at Chelsea – the team she still supports – before also featuring for Charlton, Everton, Liverpool, Arsenal and ending her career at Reading. She won two WSL titles at Liverpool and two FA Cups with Everton and Arsenal respectively.

But she will be best remembered for her talent in central midfield, as well as vital goal contributions throughout her 20-year career.

After announcing her retirement on social media, Williams said: “It has been a pleasure and a privilege to have had a career of more than 20 years within the women’s game, with some incredible highs.

“I look forward to remaining within the game, pursuing opportunities within the media and continuing my coaching badges.”

The end of the WSL season also marks the departure of Joe Montemurro at Arsenal after a hugely successful spell at the club.

When announcing his decision to leave the club to spend more time with family, Montemurro said: “My three-and-a-half years at Arsenal have been a fantastic adventure, the highlight of my coaching career.

“This has been the hardest professional decision of my life, as I absolutely love this job and this club, the club I have supported all my life. I’m hugely grateful to the club for their unrelenting support during my time here and in understanding and respecting my decision.

“I’ve had a fantastic time here at Arsenal and I am proud of what we have achieved. I must thank all the fans, players, staff and the club. This club has always been a leader in women’s football and I will be cheering us on to the next level as I watch as a passionate and enduring fan.”

We’re held to a draw…

But @UWCL football is ours! 😍 pic.twitter.com/6FfZDnJFho

Montemurro guided the club to a sensational WSL title in the 2018/19 campaign – some of the records they set have already been listed above – which was their first title since 2012. That year, Montemurro was nominated for the FIFA World Women’s Coach of the Year and won the WSL League Managers Association (LMA) Coach of the Year award.

Montemurro also won the Women’s League Cup in 2018 and reached the final in the follow two seasons, but finished as runners-up. He also helped Arsenal back into the Women’s Champions League, where they reached the quarter-final stage last season.

His Arsenal team were also involved in the game that drew the highest-ever attendance for a WSL match, when 38,262 fans watch the north London derby at the Tottenham Hotspur Stadium in November 2019. Montemurro’s Gunners also hold the record for the highest winning margin in the history of the WSL, beating Bristol City 11-1 at Meadow Park in December 2019.

Former England international Sue Smith says Montemurro should be proud of his achievements while at Arsenal and expects the club to target a title challenge under his successor.

“They were so dominant for many years,” Smith told Sky Sports News in April. “It just seems that Chelsea and Manchester City have taken over in that, so I think the next manager that comes in will certainly be looking to take them to that next level.

“[Montemurro] is a very good manager, a very good player-manager so I am sure once he has had a little break, had some family time [then] we will certainly see him back in management very soon.”

Sky Sports has announced a three-year deal with the FA to become the primary broadcaster of the Barclays Women’s Super League from September 2021.

The deal will see Sky Sports show at least 35 games exclusively live per season and further strengthens the broadcaster’s commitment to women’s sport.

The WSL will get the full Sky Sports treatment with lengthy build-ups and reaction to all live matches, plus daily news from the competition across Sky Sports News and Sky Sports’ digital platforms.