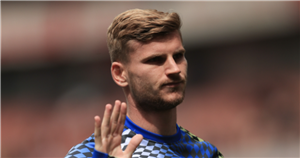 Chelsea have no intention of selling Timo Werner – despite the Blues star being heckled by a fan.

Werner faces renewed competition for his place after the signing of £97.5m striker Romelu Lukaku, who was unveiled by the club yesterday.

But an open training session featuring the pair earlier in the day was hijacked by a Chelsea fan who delivered an embarrassingly blunt message to Werner.

Interviewed by club presenters over the Stamford Bridge PA system, he said: “Listen, I've got a word. Let's have it. Get Werner out the club.”

That prompted a chorus of boos from supporters around him, with one fan yelling back: “You get out! Who are you? Who do you you think you are?”

It is unclear whether Germany star Werner, a £48m buy last summer, heard the comment.

But despite speculation about his future earlier this summer, and the arrival of Lukaku, it is understood Chelsea have no plans to sell him.

He was also part of the team which beat Manchester City in the Champions League final.

Werner and Lukaku were pictured deep in conversation during the session and the German publicly welcomed him to the club last week.