Crystal Palace have one win in seven and were mauled 7-0 by Liverpool last week… Roy Hodgson has a record as bad as Alan Pardew when he got the boot in 2016, so could defeat against Leicester edge Premier League’s oldest boss, 73, closer to the sack?

At the start of every home Crystal Palace match, their PA system bellows out the 1960s smash hit Glad All Over by The Dave Clark Five.

It does the same after every win at Selhurst Park too, although we’re now approaching almost two months since that scenario (a 4-1 victory over Leeds on November 7).

Quite simply, the Eagles’ wings have been clipped and fans fear they’re plummeting at an alarming rate under under-fire manager Roy Hodgson. 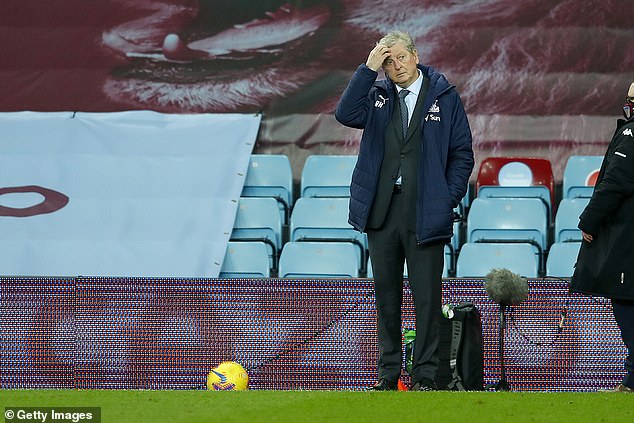 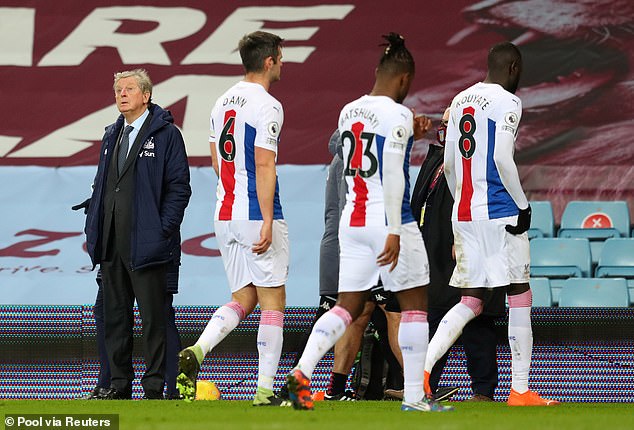 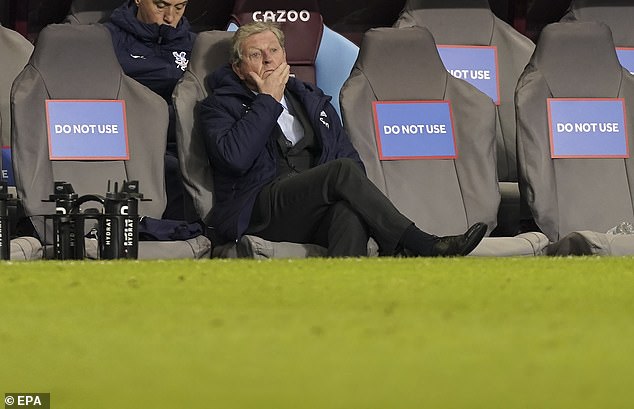 Palace are winless in their last four matches – and the latter two of those have resulted in aggregate scoreline of 10-0 against them. Delving further and they have only won one of their last seven fixtures (an emphatic 5-1 win at West Bromwich Albion on December 6).

Supporters are unhappy and there is an increasing demand among them for Hodgson to be sacked.

The 7-0 home thumping at the hands of Liverpool on December 19 was woeful – but Boxing Day’s 3-0 defeat at Aston Villa was just as bad, if not arguably worse.

Against Premier League champions Liverpool, Palace played well in parts and were unlucky not to score. They were also on the receiving end of some world-class finishing by the rampant Reds.

However, at Villa Park on Saturday the same cannot be said for their display. 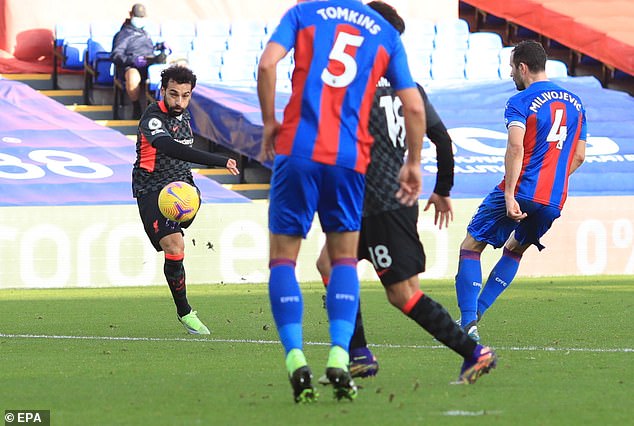 Despite playing well in parts, Palace were thumped 7-0 at home to Liverpool on December 19 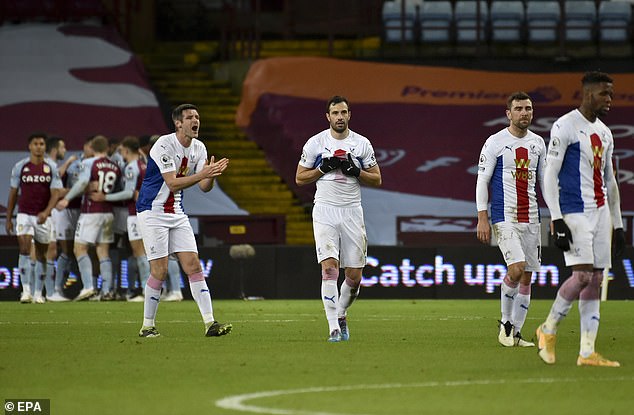 Talisman Wilfried Zaha had a golden chance to put Palace ahead in the opening exchanges but after that you will be hard-pressed to think of a clear-cut opening for the visitors.

And despite being reduced to 10 men in the first half, when Tyrone Mings was shown a second yellow card, it was Villa who looked more the likely to score. This was emphasised by their two second-half goals to build upon Bertrand Traore’s fifth-minute opener.

The scoreline could’ve been worse for the visitors too had Traore and Ollie Watkins’ shots didn’t hit the frame of Vicente Guaita’s goal – highlighting how abject Palace were.

It’s not inconceivable that Hodgson’s side stretch their winless run to five games on Monday afternoon when they host high-flying Leicester City.

And defeat at Selhurst Park will only ramp up pressure on Hodgson – with fans growing increasingly tired of his style of play. 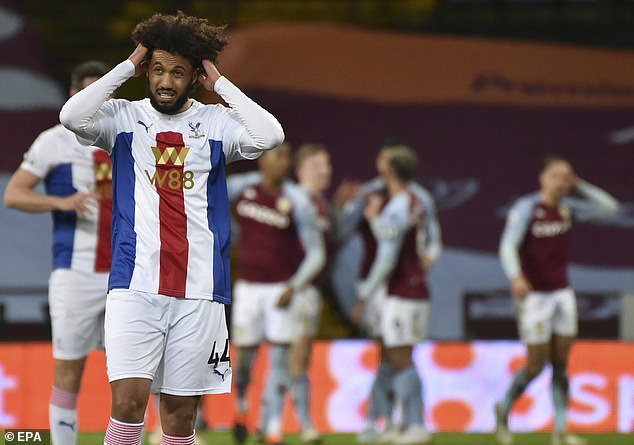 The 73-year-old has achieved his minimum target of maintaining their Premier League status every season since he was appointed in September 2017.

And while supporters are grateful for that, like all clubs they dream of more. They dream of progression.

Led by Zaha and summer signing Eberechi Eze there is exciting, attacking talent within the London club’s ranks. However, they’re too often stifled by Hodgson’s defensive-minded tactics.

This grates with supporters who yearn for their creative players to have freedom to express themselves and attack teams. What’s the point of having these players on the pitch if they’re so rigorously confined to a defensive gameplan?

A glimpse at social media on Boxing Day saw many compare Hodgson’s last 20 Premier League matches as Palace boss to Alan Pardew’s when he was in the hotseat there. And for the former, it makes for uncomfortable viewing.

The former England manager is only a point better off than Pardew – despite boasting a much better squad than he did.

Hodgson has collected a measly 19 points out of a possible 60, winning five matches, drawing four and losing 11.

In comparison, Pardew won five games, drew three and lost 12 before he was sacked. He was fired on December 22, 2016 with the club 17th in the Premier League.

All of the above are eerie parallels to Hodgson’s current tenure and it is further worrying for him when you consider the goal difference column.

Hodgson’s last 20 games have seen just 22 goals scored, while 38 conceded – resulting in a minus-16 goal difference.

By contrast, Pardew’s team scored 31 goals and conceded 38 – resulting in a better goal difference of minus-seven.

So despite boasting a better squad, Hodgson has seen his side concede the same amount of goals as Pardew’s team did, while scoring nine fewer. No wonder some of Selhurst’s faithful are frustrated.

This barren run includes a horrific end to last season following the Premier League’s restart. After winning 2-0 at Bournemouth, Palace lost seven-straight matches, before ceasing that dire record with a season-ending 1-1 home draw with Tottenham.

Questions over Hodgson’s future were raised then too, but the board had already shown their commitment to him by tying him down to a new one-year contract extension on March 6.

Eddie Howe is one name some supporters would like to see replace Hodgson as manager.

The two have opposing philosophies with Howe more expansive – as his second spell at Bournemouth proved. The thought of him unleashing Zaha and Eze whets the appetite of the Selhurst Park faithful.

The 43-year-old was close to becoming Eagles boss before with chairman Steve Parish revealing in 2015 that he thought he had secured his services in January 2011. However, they missed out to Burnley – who offered Bournemouth a greater substantial compensation package that they couldn’t match. Parish went to bed expecting to announce the then 33-year-old’s arrival from Bournemouth the next day. But then, he awoke to unanticipated news.

‘Suddenly it had all changed and he was going to Burnley,’ he has been quoted as saying in the past.

That fantasy may become a reality in future, unless Hodgson can turn things around in south east London.

And addressing the year to the club’s fanbase on their website, he was bullish about the forthcoming year ahead.

‘As Crystal Palace supporters, you can be proud of having a team which hasn’t broken the bank but, because of its spirit and its attachment to a region, produces enough results to keep the football you want to see coming every year,’ he wrote.

‘I think proper supporters – and Crystal Palace supporters are, to my eye, proper football followers – know that well. But it’s easy to forget sometimes. Maintaining a sense of perspective is one of the hardest things that one can do.

‘Now, we have a big fight on our hands to have a good season. There will be lots of games where your support can lift us, because you’ve done that many times already. In my time at the club, there’s no doubt I’ve been indebted to the fans who’ve produced the emotion and lifeblood to pull us through on many occasions. I really hope you continue to do so.

‘Undoubtedly, this year has been a collective challenge. It has taken lives, altered families and friendships and recast our understanding of normality for the foreseeable future.

‘But we have made it this far as a club, with each and every one of you at the heart of that. I greatly look forward to everything 2021 has to bring us all at Crystal Palace and hope that together we can look towards a brighter future.’

For Hodgson’s sake, he’ll be hoping that brightness begins on Monday as Palace supporters certainly aren’t feeling Glad All Over at the minute.