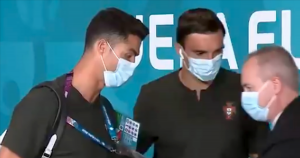 The 36-year-old forward is tasked with leading his side to a defence of the European Championships, which starts against Hungary.

He played a big role in their last meeting at Euro 2016, scoring two goals to secure a memorable 3-3 draw in Lyon.

Since lifting the Henri Delauney Cup in France, Ronaldo has won 12 more major titles as well as two Ballon d'Ors.

And his social media following of 298m means the Manchester United, Real Madrid and Juventus legend is one of the most recognisable people on the planet.

But footage has emerged of a security guard at the Ferenc Puskas Stadium in Budapest, Hungary, who has not got the message.

In the clip, Ronaldo is making his way past the media scrum with a member of the Portugal team.

Wearing a big identity badge, he is approached by the security guard who asks for a confirmation of the Ballon d'Or winner's ID.

The forward is not fazed by the encounter, though, as he quickly moves on to prepare for the match.

Ronaldo was wearing a mask as he followed Covid-19 protocols in place across the tournament, with the security guard also following his by checking the ID

Footage was quickly shared on Twitter, where fans were left in stitches at the moment.

"Great news for Portugal. Hungarian security have let Ronaldo into the stadium," one sarcastically said.

Another comments: "No way did I just see security check Ronaldo’s player ID!"

Ronaldo is looking to lift the Euro trophy for consecutive tournaments, with Portugal beating France in their own competition five years ago.

With 778 goals and 31 major trophies in his illustrious career, the 36-year-old has kept himself in shape with strict training and diet methods.