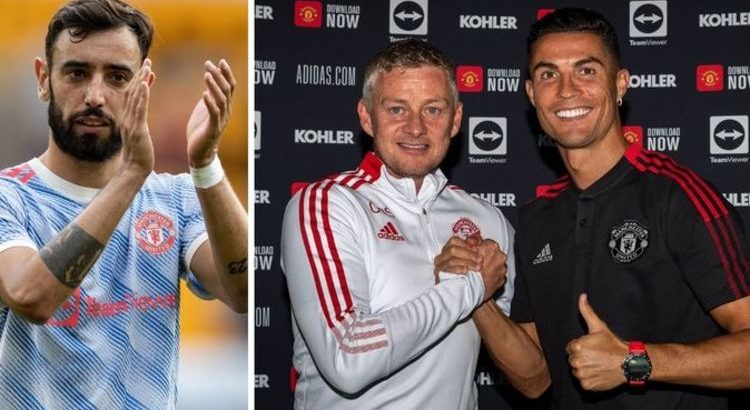 Manchester United boss Ole Gunnar Solskjaer says Cristiano Ronaldo and Bruno Fernandes are already aware of who will be taking penalties from here on in. The Portuguese duo are now set to join forces at club level as they look to drive the Red Devils towards major trophies.

Fernandes’ impeccable spot-kick record for United speaks for itself having dispatched 22 of his 23 penalties.

His only miss came against this weekend’s opponent Newcastle but the playmaker still managed to get on the scoresheet in the 4-1 win at St James’ Park last season.

The 27-year-old has scored a grand total of 42 penalties in his career, missing just three.

He was United’s penalty taker before he left to join Real Madrid in 2009 and now he will be hoping to return to spot-kick duty.

JUST IN: Manchester United can kill two birds with one stone with £54m Nemanja Matic replacement

Solskjaer has made it clear he will be calling the shots though having already discussed the situation with his two players.

“I’ve had a chat with the two of them,” said Solskjaer. “We’ve got two players there that I’d trust with my life to put a penalty away and that’s a great position to be in.

“It’s going to be my decision what will happen. The two of them will keep on doing what they do when they’re asked to take the penalties.”

Ronaldo joined up with his new team-mates early at Carrington after he left the Portugal camp prematurely due to suspension following the 2-1 win over the Republic of Ireland.

Yet Solskjaer has already confirmed he will make his second debut tomorrow but he refused to declare whether he will start the match or be on the bench.

“He’s been having a good pre-season with Juventus, he’s played for the national team, he’s had a good week with us here,” Solskjaer added.

“He’ll definitely be on the pitch at some point, that’s for sure.

“He’s been good [in training]. Of course, we’ve followed his career from afar since he left here and everyone’s very happy to have him back.

“He can speak for himself, but it seems like he’s happy to be back as well. The mood has been very good, he’s worked well and we’re looking forward to Saturday of course.”

Ronaldo will also be donning the famous No 7 shirt after Edinson Cavani kindly vacated it to take Daniel James’ No 21.

Solskjaer has explained how Ronaldo called Cavani to request the shirt and Cavani kindly obliged, a gesture that was gratefully received by the 36-year-old, who has already thanked El Matador on social media.