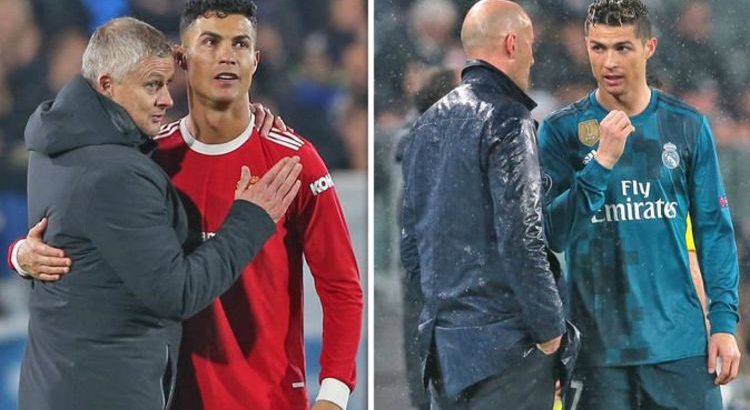 Cristiano Ronaldo has played under both Zinedine Zidane and Ole Gunnar Solskjaer throughout his career so far. And the Manchester United star is likely to be a regular starter under whoever he takes over at Old Trafford. Especially after netting nine goals from 13 outings across all competitions since his Hollywood homecoming on deadline day.

He signed a new three-year contract shortly after their Europa League final defeat to Villarreal, while the Glazers also gave the 48-year-old big transfer backing to mould a team in his image.

However, months on from United’s summer spending spree, and the Norwegian’s future at Old Trafford is up in the air.

Fresh reports have linked Zidane to the job, with the Frenchman out of work following his departure from Real Madrid back in the summer.

And, should the 49-year-old decide to take over at Old Trafford, he’ll be reunited with Ronaldo.

The duo worked well together at Real Madrid, helping the La Liga titans dominate the Champions League with three triumphs on the trot.

And Ronaldo has never hid his admiration for his old boss in the years since they parted ways.

Speaking in 2019, shortly after Zidane returned to Real Madrid, the Portugal international delivered his verdict by saying: “Zidane can manage the squad intelligently.

“At Madrid every player wants to play every game so from a managerial position, it is not easy to delegate all these decisions and make the calls.

“He knows how to handle this with a lot of thought.

“And he knows how to manage the squad.”

“The confidence that a player needs doesn’t only come from himself but also from the players around him and the coach,” he said.

“You need to feel like you are an important part of the group and Zidane made me feel special.

“He helped me a lot. I already had a lot of respect for him but working with him made me admire him more.

“That’s because of what he’s like as a person, how he talks, how he led the team and how he treated me.”

Ronaldo has, however, made it clear this season that he feels United shouldn’t sack Solskjaer.

Last month, the Portugal international called on the Glazers to give the Norwegian time to adjust to having new players in his squad.

And while that was before home defeats to Liverpool and Manchester City, Ronaldo was strong with his comments.

The 36-year-old told Sky Sports: “We are in a moment in my opinion that Manchester [United] do a few changes; they buy me, they buy [Raphael] Varane and [Jadon] Sancho.

“The adaptation will take time, even the system of the game that we play, but I think step by step we have to put it in our mind that everything is possible.”

United’s hierarchy appear to be thinking the same as Ronaldo.

They’re eager not to pull the trigger on their former striker just yet, especially after their decision to give him a new deal mere months ago.

But the brutal fact of the matter is that Solskjaer must improve results or face seeing his head roll.

Zidane is one option to take over.

And Brendan Rodgers and Mauricio Pochettino have been linked, too, despite their commitments at Leicester City and Paris Saint-Germain respectively.

Ralf Rangnick, meanwhile, is an dark horse for the job.