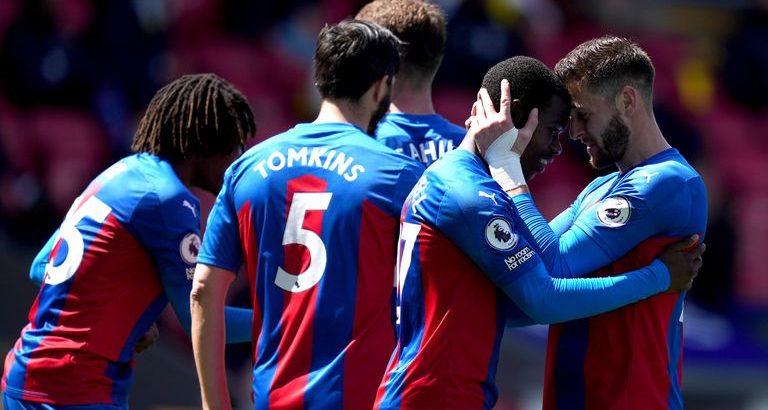 Tyrick Mitchell scored his first professional goal as Crystal Palace came from behind to beat Aston Villa 3-2 in an exciting end-of-season encounter.

Villa started with plenty of punch in south London and got the lead their play deserved when John McGinn – skipper for the day – drilled home a low effort from outside the box (17).

Christian Benteke scored for the third game running (32) to level it up but Anwar El Ghazi lashed home two minutes later (34) after some sloppy defending from Gary Cahill.

Palace have never come back to win a Premier League game when behind at half-time under Roy Hodgson but despite Jack Grealish playing 30 minutes from the bench, Wilfried Zaha kickstarted the comeback (75) before Mitchell forced home the winner six minutes from time to become the unlikely hero.

In what was a pulsating match, only Manchester United’s encounter with Leeds United had produced more shots than this game this season with 43 being registered across the 90 minutes.

Man of the match: Tyrick Mitchell

Villa were much the quicker out of the blocks with Jacob Ramsey firing an effort wide inside a minute and Kortney Hause heading two great chances wide from corners.

Cahill, who was given the run-around by Ollie Watkins all afternoon, made a poor headed clearance which presented McGinn with the ball and the Scottish international curled into the bottom corner with expert precision.

The Eagles stepped it up a gear after falling behind with Andros Townsend testing Emi Martinez before Benteke struck against his former employers.

Mitchell produced a fine chipped cross into the area and Benteke needed no invitation to head back across goal and into the corner. It was like the Benteke from his Villa days.

Parity would not last long as Watkins again got his team in behind with a great run. Eventually a cross was totally misjudged by Cahill and Watkins flicked a header to El Ghazi, who drilled home from 10 yards out.

Palace stepped up their intensity after the break with Eberechi Eze seeing much more of the ball in dangerous areas. Benteke rattled the bar with a header from a corner before Grealish was summoned by Smith with 26 minutes left although he failed to have an impact on the momentum of the game which was swinging Palace’s way.

Roy Hodgson also tweaked their formation following the Grealish substitution to a 4-4-2 and it paid dividends.

Zaha, who had been wide left, was now in the middle and drove in behind Hause before switching back onto his right and firing a low effort into the net for his 11th Premier League goal of the season.

Eze came within inches of the winner in the 82nd minute when he smashed an effort against the crossbar, but the third goal for Palace did arrive two minutes later and via an unlikely source.

Eze’s seventh shot of the game bounced into the six-yard box and although the finish wasn’t pretty, Mitchell was brave to get his shoulder in the way to divert home the winner. A moment he’ll never forget.

Palace are back at Selhurst for their final home game of the season on Wednesday when fans will be in attendance. Arsenal are the visitors. Meanwhile, Villa have another London fixture with a trip to Tottenham on Wednesday, live on Sky Sports.