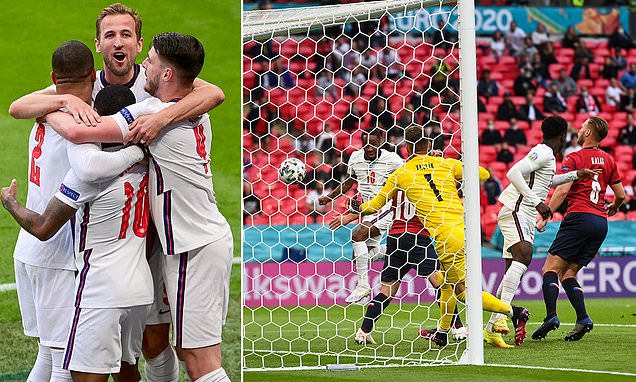 Football may not be coming home just yet, but England are at least staying there, for now.

This was the win that ensured England will remain at Wembley for their round of 16 fixture, against opponents likely to be a significant upgrade on this.

Czech Republic are a tidy side and this was never entirely comfortable with such a slight lead to defend, but with the next match almost certain to be against one of France, Germany or Portugal, it’s fair to say the tournament proper for Gareth Southgate and his players begins next Tuesday.

This was a test of nerve, mind, and they passed. Raheem Sterling became the first player since Alan Shearer to score England’s first two goals in a European Championship tournament; creative gambles on Jack Grealish and Bukayo Saka were justified; Harry Kane had his best game so far, and got the fans back onside; while Harry Maguire came through unscathed for 90 minutes, Jordan Henderson for 45. It was a good night. 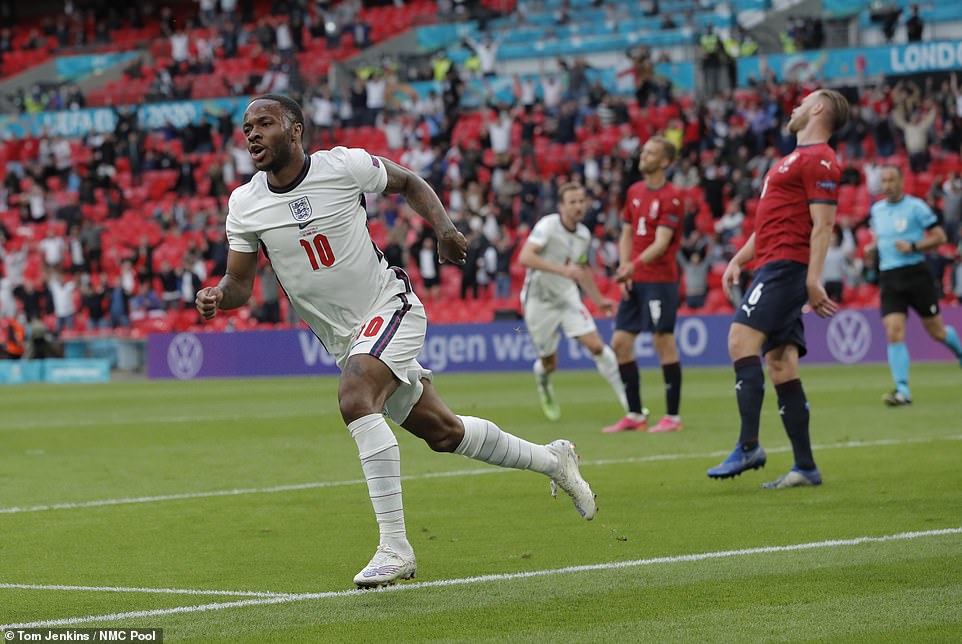 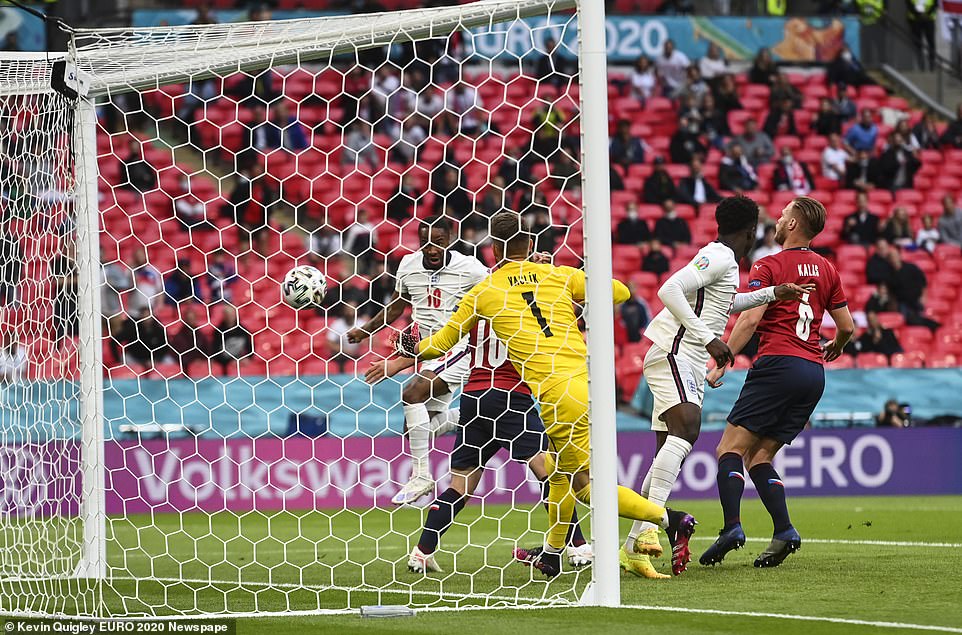 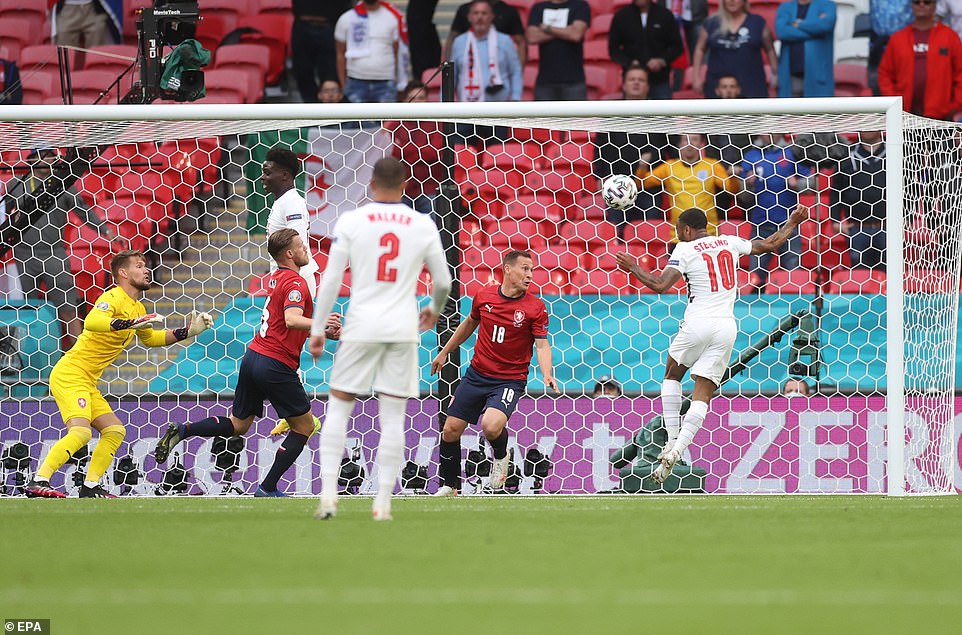 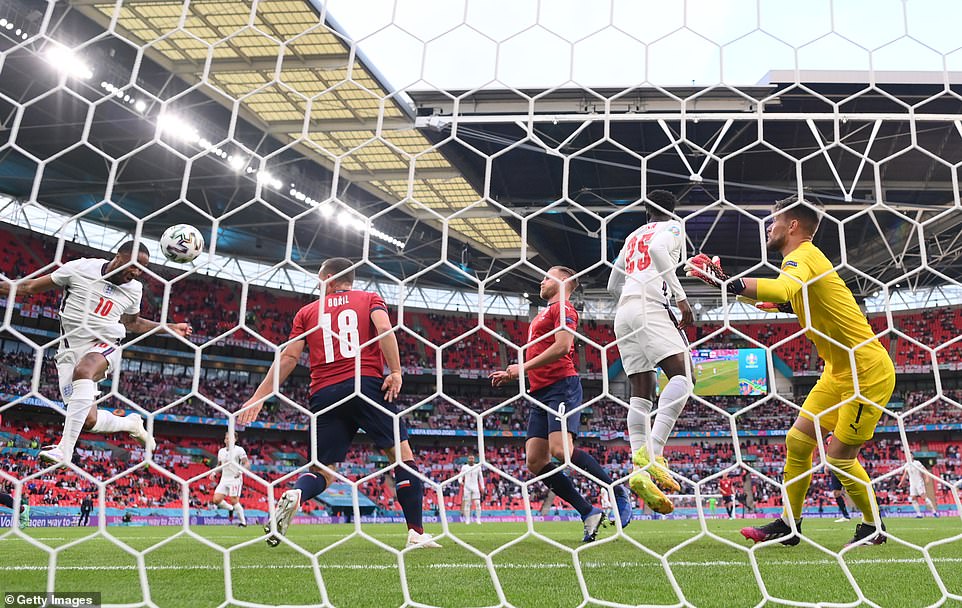 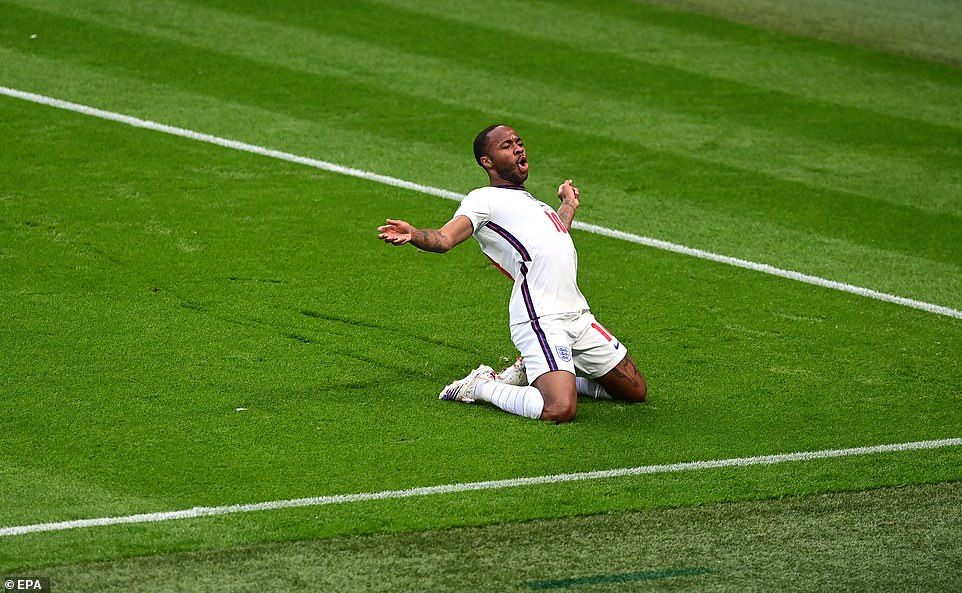 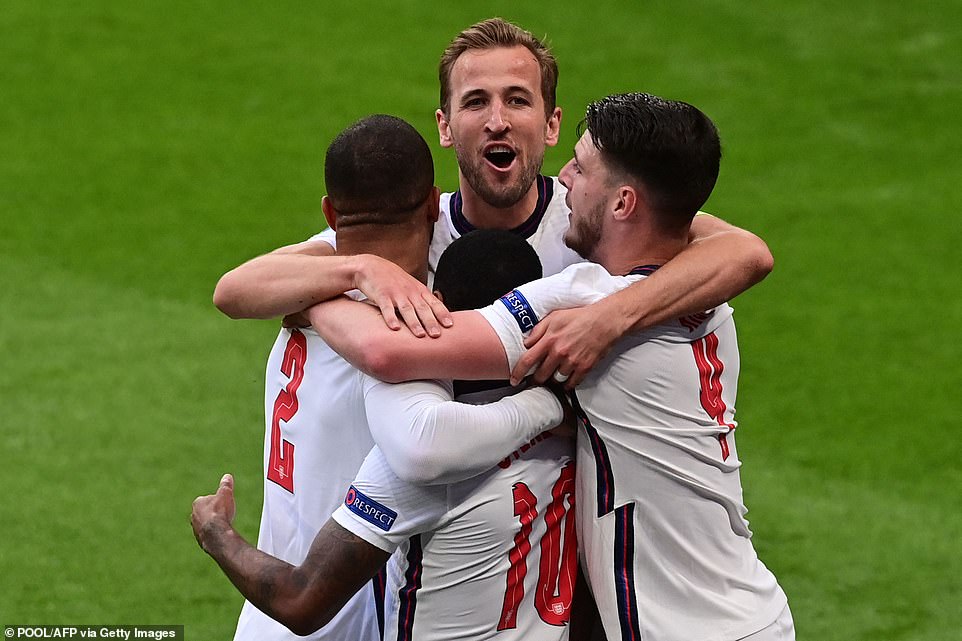 England’s No 10 is swarmed by his team-mates, who congratulate him for scoring the opening goal on Tuesday evening

Not one that laid down a marker as Italy, France, Germany and Belgium have to here, but one that got the job done. England topped the group and by three clear points. Southgate would have settled for that outcome before the competition began.

With Mason Mount out of the next round of fixtures, too, it was important Southgate alighted on an alternate attacking approach, and now he has one.

Phil Foden may be restored to the team next week, but Grealish and Saka are vying for a place after showing the bravery to run with the ball and the wit to open up an organised defence.

They faded after half-time, but so did England. It was more the scoreline that unnerved than anything the Czechs created, however. Jordan Pickford made one excellent save the whole match.

Southgate will feel encouraged too that Maguire looked back to his best at the heart of defence, and that Henderson had more success dictating the pace of the game than the man he replaced, Declan Rice. 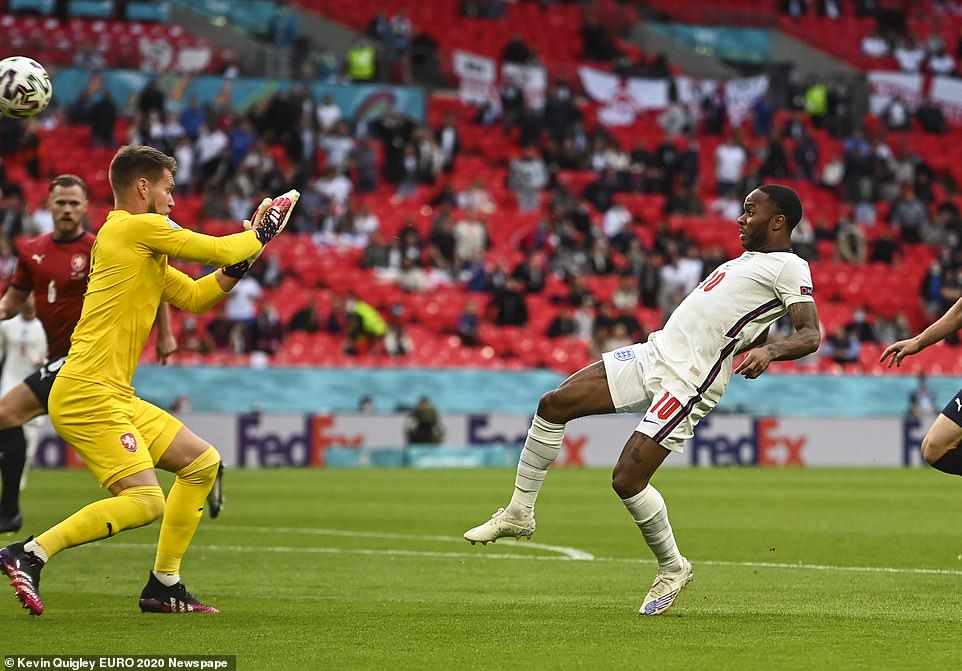 Sterling came close to breaking the deadlock 10 minutes before, where he lobbed the ball over an on-rushing Tomas Vaclik 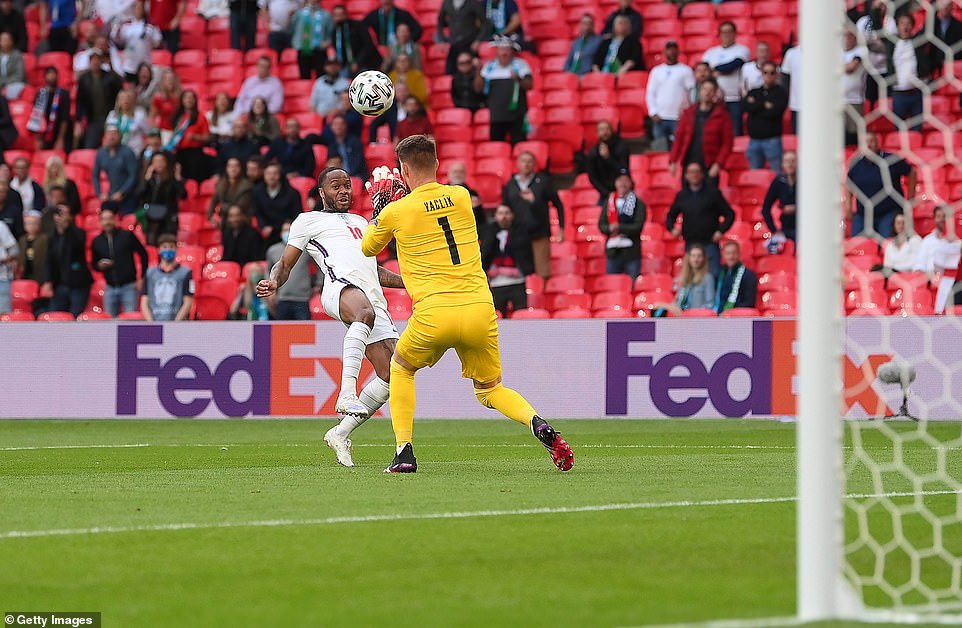 While Sterling was able to beat Vaclik to the ball and shoot at goal, his lobbed effort could only strike the post 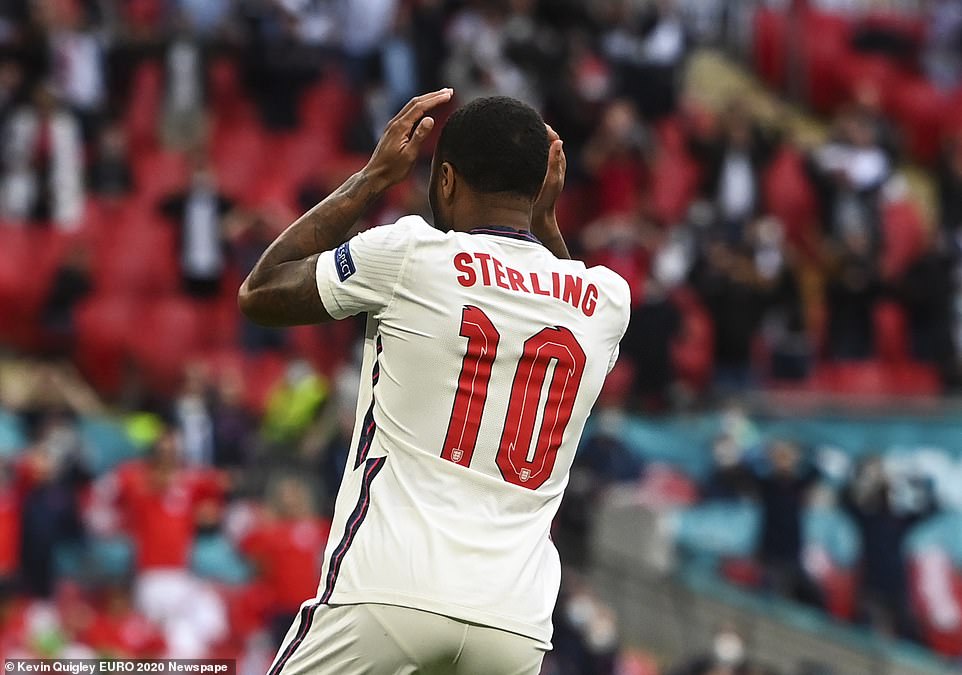 Options are appearing and the gamble on using the increased squad size to allow experienced players to return to fitness has paid off. This is still a young squad, but it no longer has to be a young team.

It shows the lather the nation can get itself into during tournaments that a match against a nation England defeated 5-0 to qualify for this should cause such trepidation. Czech Republic certainly didn’t seem like world-beaters when England beat them so convincingly at Wembley on March 22, 2019.

Raheem Sterling scored a hat-trick that day and if someone had said England would need a win over the same opposition to top the group in the finals, most would have taken the offer in a heartbeat.

So the Scotland draw truly hurt Gareth Southgate and his players. It sapped the belief in the team and the covid crisis that has followed could only have enhanced that. Yet tournaments are strange affairs. Sometimes changes of fortune can be found in the unlikeliest places.

The absence of Mason Mount served to highlight the jeopardy of the yellow card against the name of Phil Foden. So Southgate shuffled his pack, introduced Jack Grealish and Bukayo Saka, and they were a revelation for England. 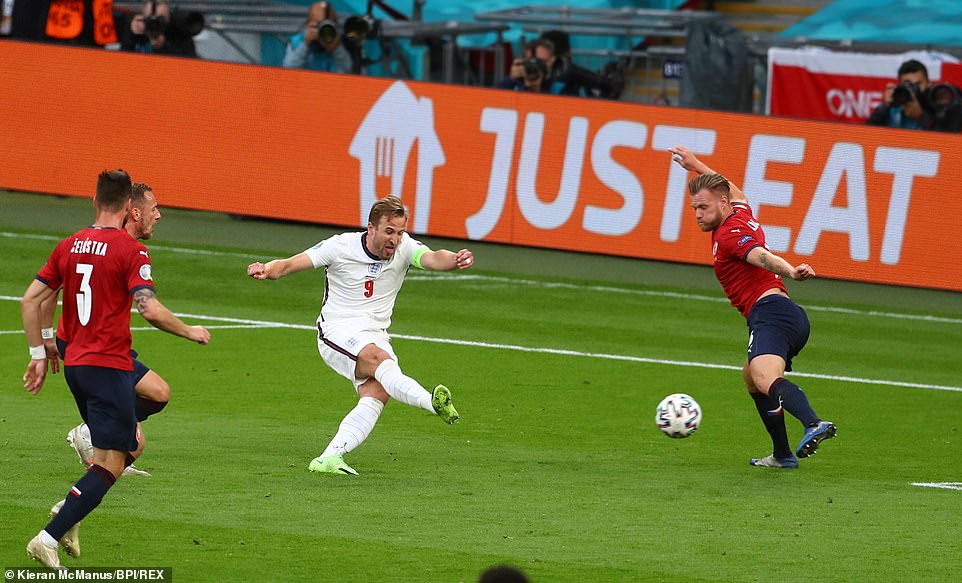 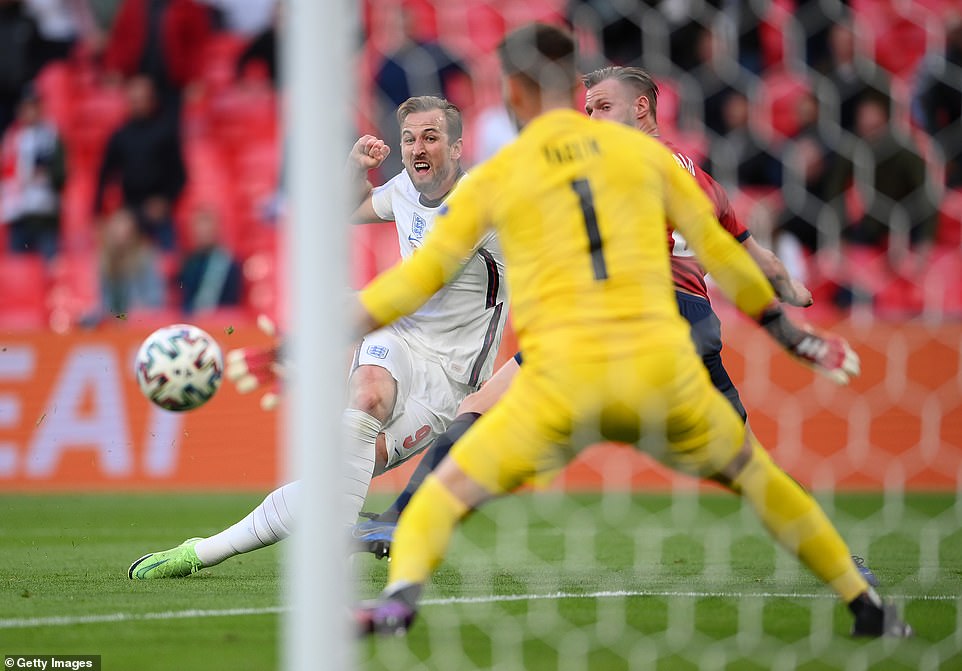 Kane cut back in on his right foot before trying to curl the ball past the Czech keeper, only for Vaclik to pull off a brilliant stop 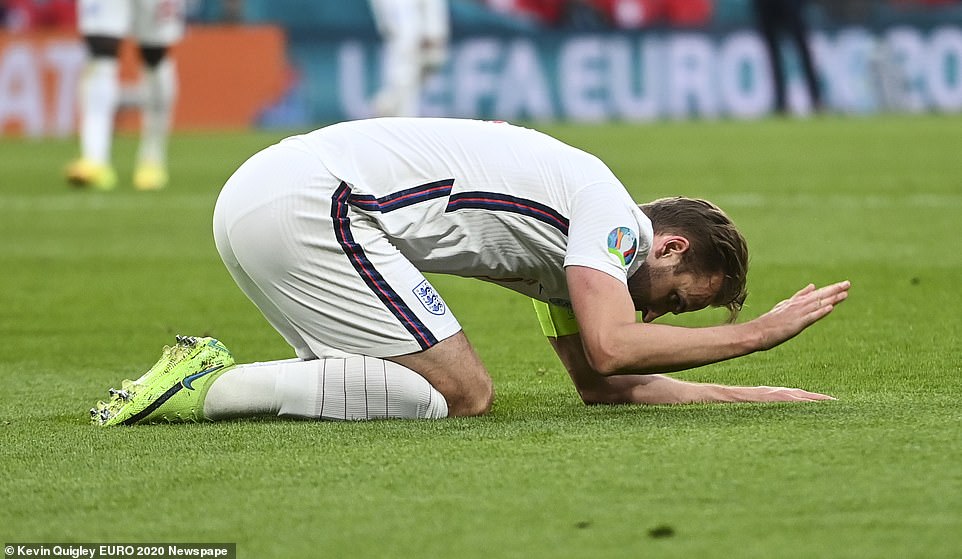 Energetic, hard running, desperate to take men on, they brought Harry Kane to life, and Sterling, too. Here was the performance that had been hoped for against the Scots. England took the most slender lead in at half-time – a single goal – but the display was better than that.

It excited the fans, sparked the team, and England could have led by more. They hit the post within two minutes, forced good saves from goalkeeper Tomas Vaclik. Everything that had been missing last Friday could be found here. Even the deadlock breaker.

It was Sterling again, two out of two for him at this tournament – the only England scorer across five halves of football. It was a goal that showcased what the new blood had brought to this team, initially set up by a lovely run from Saka, testing the Czechs with the ball finally ending up at the feet if Grealish, overlapping on the left.

He returned the ball with a cross which eluded Saka but was read to perfection by Sterling, who arrived at the far post to head the goal. 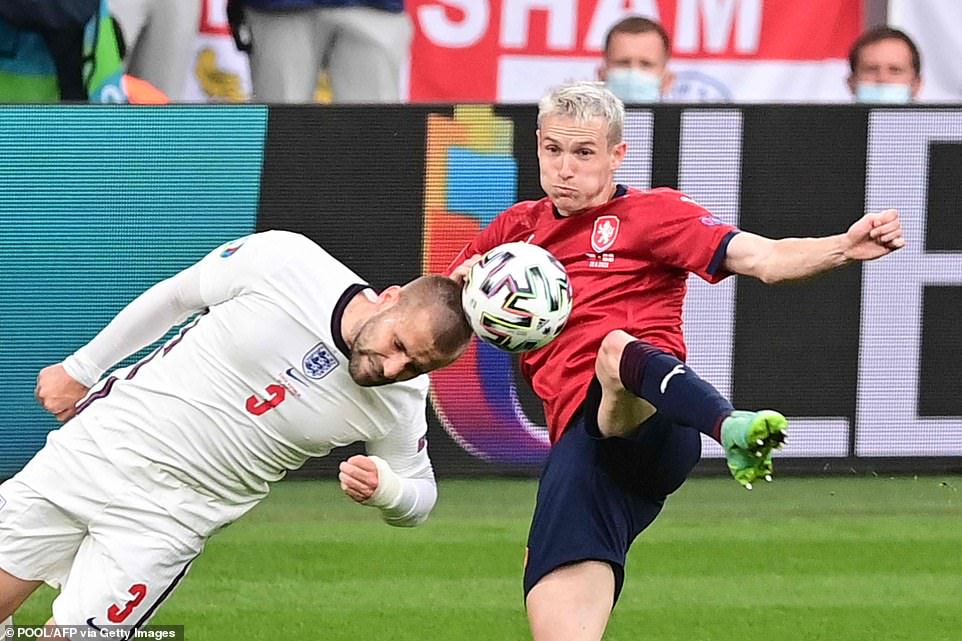 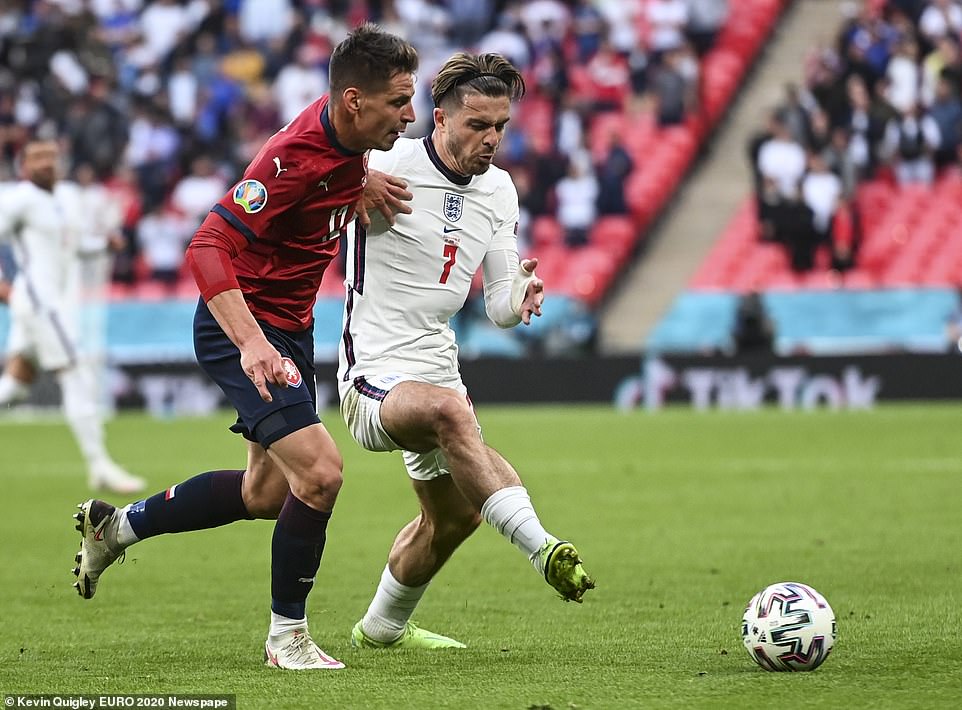 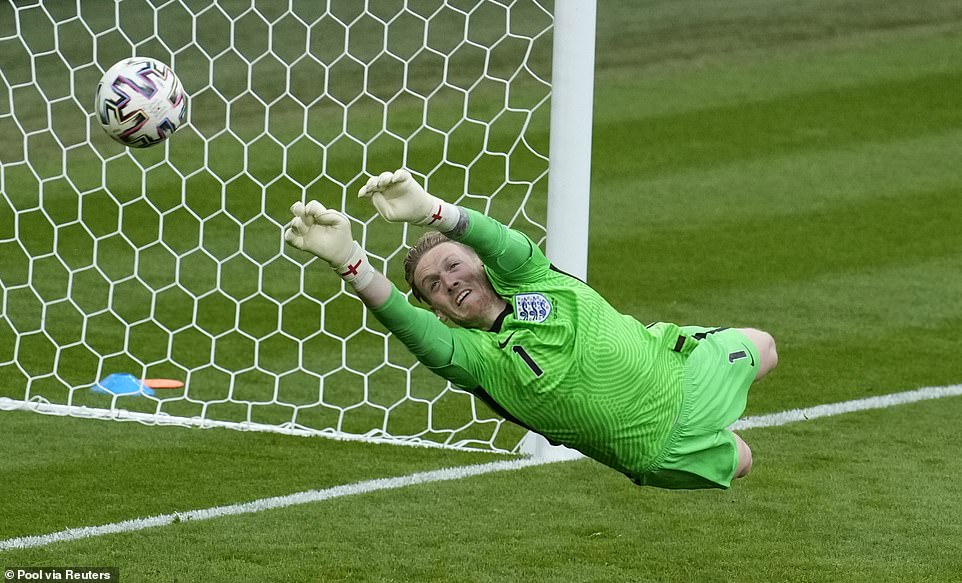 It was his 14th in his last 19 games for England and his fourth in that run that had been scored against the Czechs. If his form dips, the Wembley crowd are often quick to turn – but they are inspired to do so less and less of late.

It was his second touch of the night in the Czech penalty area and the first should have ended in a goal, too. Luke Shaw played a quite fabulous ball down the line which Sterling chased down, drawing Vaclik before lobbing the Sevilla man, only to see the ball rebound agonisingly off the far post. One of those nights? Thankfully, Sterling left it only 10 minutes before erasing those fears.

This was a strong start by England, not least because Kane seemed considerably more involved. It was an inauspicious start, a shot blazed over after 11 minutes, but his movement was good and England’s runners allowed him to find space. 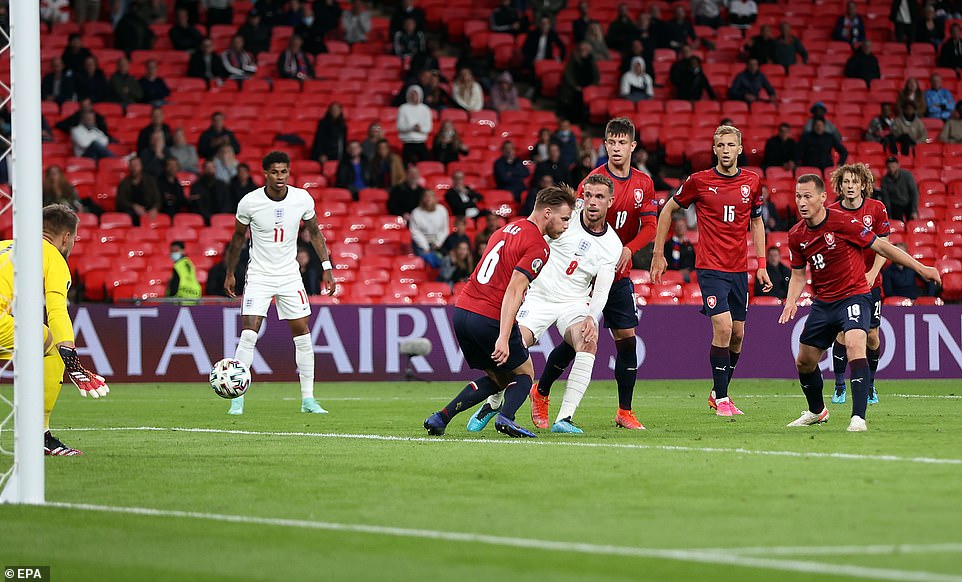 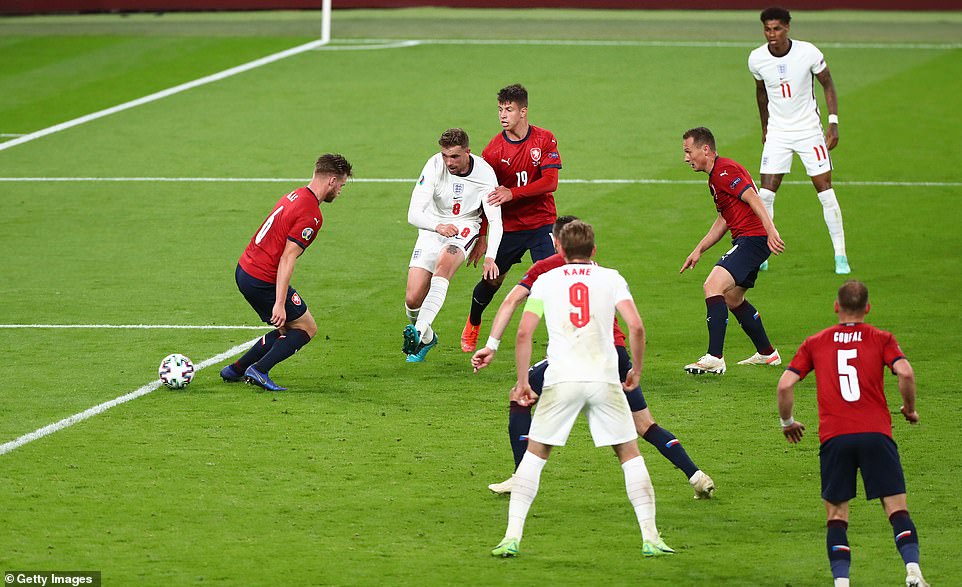 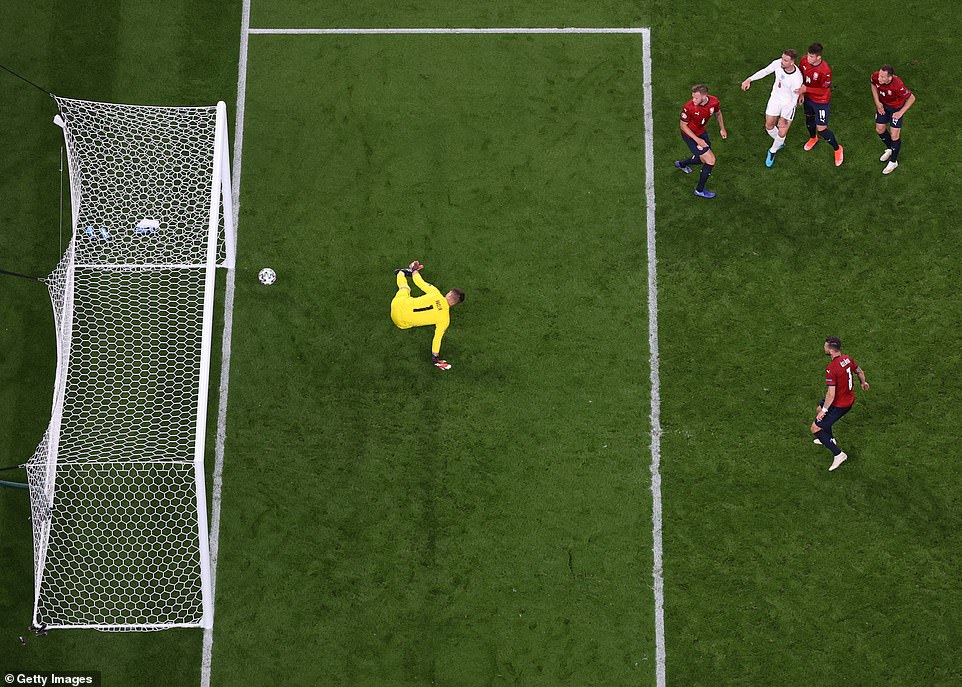 Henderson’s effort wrong-footed Vaclik in the Czech goal, but the goal was ruled off for an offside infringement 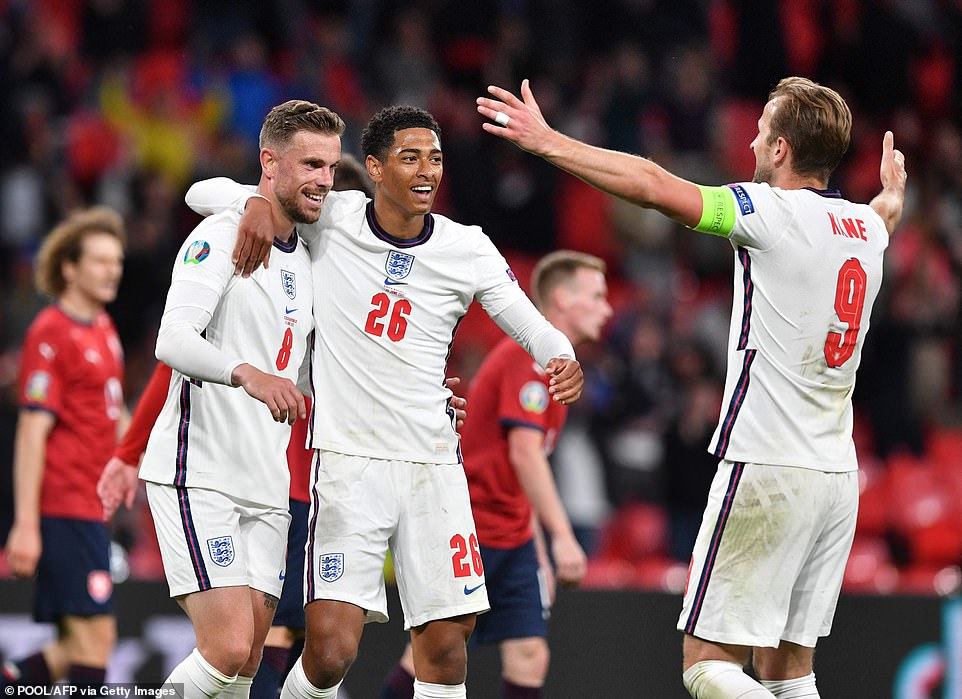 In the 26th minute, a quite beautiful pass by Harry Maguire, from back to front, but along the floor, nothing aimless, picked out Kane in a good position. He cut inside Tomas Kalas, once of Chelsea, now of Bristol City, and struck a low shot well saved by Vaclik.

The Czech goalkeeper was in action again after 37 minutes, when another dangerous cross by Shaw deflected off West Ham full-back Vladimir Couifal, needing Vaclik to scramble and tip it wide at the near post.

At the other end, the Czechs always looked dangerous on the counter-attack, but Jordan Pickford only had one save to make in the first-half.

It came from an ambitious shot by Tomas Holes from range, which the Everton man tipped wide with both hands. Kane came back to defend the corner. ‘Good save, mate,’ he told Pickford.

Qualifiers are invariably undertaken with safety nets, but tournament campaigns are made and broken on such tiny moments. 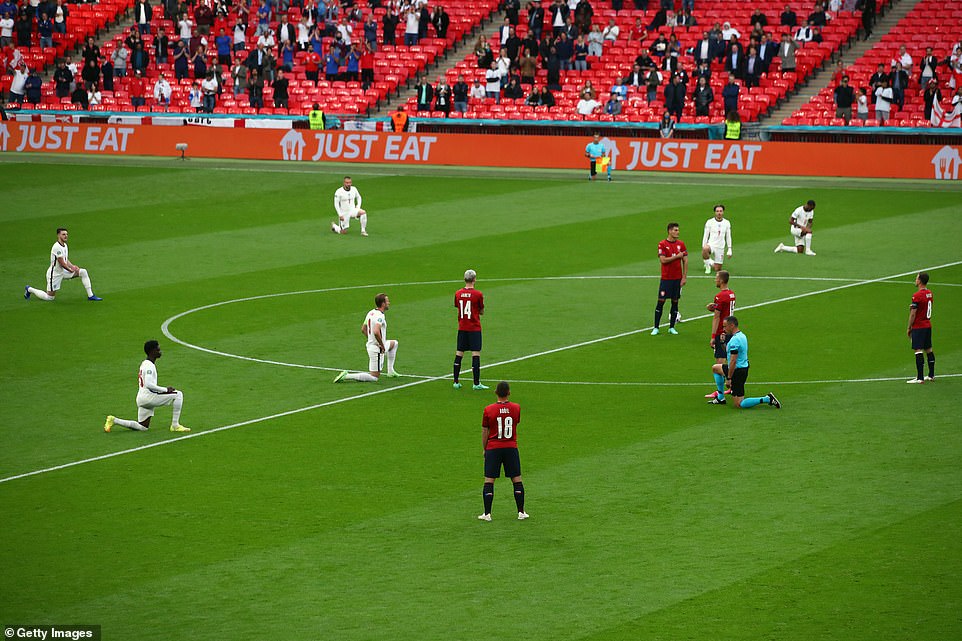