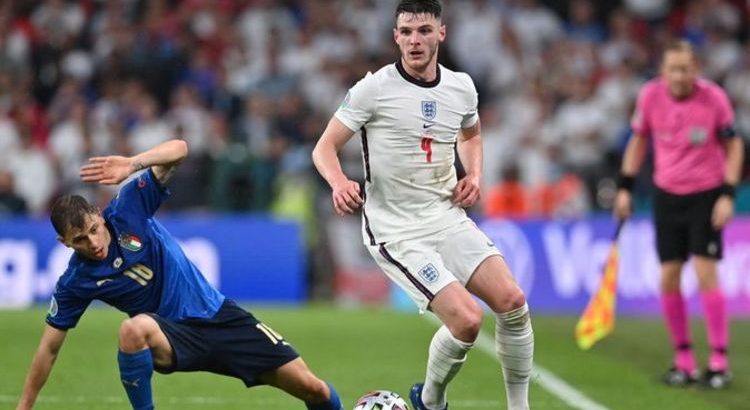 West Ham United are faced with the impossible task of cooling outside interest in Declan Rice. The dynamic midfielder has further raised his reputation at Euro 2020 and could well have added an extra few million pounds onto his transfer value.

The 22-year-old helped England to the final of the Euros, featuring in every match of the tournament for the Three Lions on their way to glory.

It was another vintage display from the Hammers’ midfielder in the final match of the tournament, which reinforced why he is at the centre of a transfer tussle.

Manchester United and Chelsea are two sides believed to be interested in striking a deal for Rice, though West Ham have remained adamant that their star man is not up for sale.

Manager David Moyes previously made clear that it would take a fee in excess of £100m for the club to even consider parting ways with Rice.

JUST IN: BBC slammed by Euro fans for cutting off pitch invader

“I don’t think [co-owners] David Sullivan, David Gold or myself have got any intention of losing Declan Rice,” he said.

He added: “For me, I have watched the prices of some players who have gone to clubs recently and they could not lace Declan Rice’s boots.

And his performances at Euro 2020 may well have ensured that Moyes’ transfer forecast may come true.

United and Chelsea may well have to smash their respective club-record transfer fees to have any hope of securing a deal.

During England’s showpiece fixture at Wembley, Rice shone in the first 45 minutes of proceedings as Southgate’s side went into half-time with a one-goal lead.

His driving runs and sense of discipline stood out once again as he and Kalvin Phillips effectively kept Roberto Mancini’s Italian midfield at bay.

This energetic opening half display was matched in the early exchanges after the interval, though Rice was later withdrawn in the 74th minute after leaving everything on the pitch for the Three Lions.

His stature has only continued to rise during this tournament, making his talent impossible for sides to ignore any longer.

Rice’s vision is to be featuring in the Champions League on a regular basis and will be all too aware that leaving the London Stadium is likely to be his best chance of achieving this.

If Chelsea or United had pinned their hopes of securing a cut-price deal for the London-born midfielder as a result of the pandemic, they will certainly have to think again.