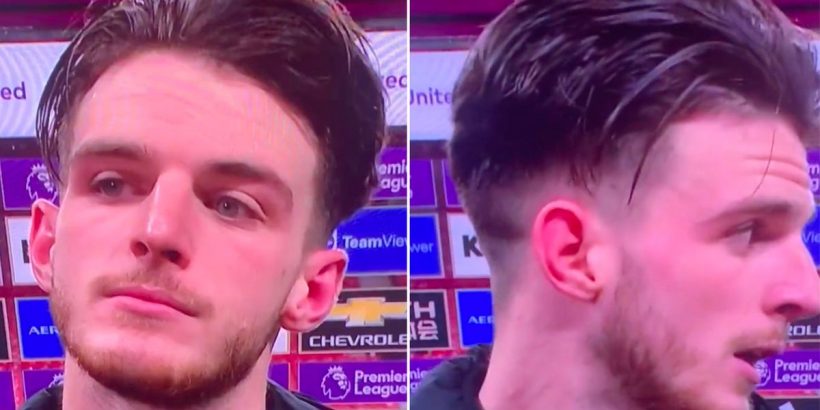 The England midfielder was his usual assured self in the middle of the Old Trafford pitch, though was helpless to prevent his international team-mate Marcus Rashford bagging a stoppage-time winner for the hosts.

Rice's performance will only have made United chiefs and supporters want to sign him more – he's already been reported as their number one transfer target for the summer.

But it was his actions off the pitch after full-time which caught their attention the most as he spoke about playing at the Theatre of Dreams.

Rice told Sky Sports: "I was loving it. Every time I come to Old Trafford, I've always said it's one of my favourite places to play.

"It's an amazing stadium."

United fans jumped on the comments and took it as as sign he would be their player come next season.

One tweeted: "The way he tries to hide his smirk after saying, '…places to play', lad knew exactly what he was doing there – we need him in a UTD shirt next season!"

Where would Rice be best off next season? Let us know in the comments section.

"You can play in the stadium all the time if you join us in the summer," suggested another.

A fellow Red Devil claimed: "It’s funny because he didn’t have to say that."

And a fourth echoed: "He knows he wants to come here."

Rice, who recently turned 23, has been linked with a big-money move away from the Hammers since establishing himself as one of the Premier League's best midfielders.

United are not alone in their admiration, with Chelsea and Manchester City also expressing an interest in him.

And there is of course a claim for him to stay where he is, with David Moyes transforming West Ham into top four contenders in the past two seasons.

His contract at the London Stadium runs until 2024, and could be extended for another year, so it would take a mammoth fee to prize him away this year.