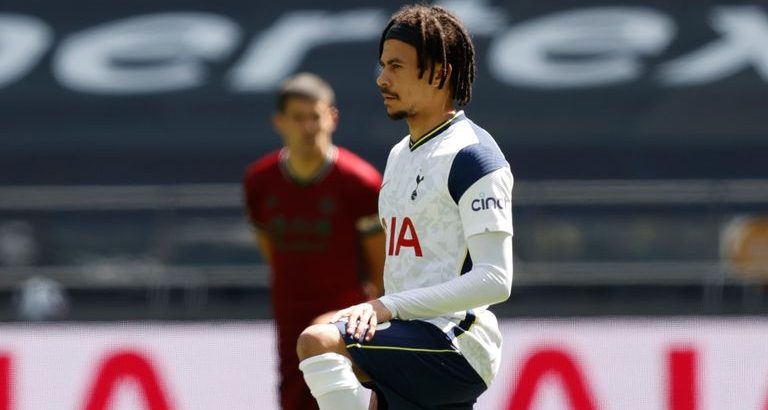 Tottenham interim head coach Ryan Mason praised the performance of the rejuvenated Dele Alli as he inspired a comfortable 2-0 win over Wolves.

Spurs strengthened their European qualification hopes with a routine victory which moved them into the top six of the Premier League.

Harry Kane opened the scoring with a goal that advanced his chances of winning the Premier League Golden Boot and Pierre-Emile Hojbjerg doubled the lead after the break.

Alli shone for the hosts in front of the watching Gareth Southgate, determined to remind the England manager of his talents, and Mason praised the attacking midfielder following his display.

“I can’t speak in terms of what Gareth is thinking. I don’t know regarding that [being selected in the England squad this summer]. But for me, Dele was excellent. I don’t really like singling out players but it’s hard not to,” Mason said.

“I’m sure everyone felt it. He ran, he pressed, he created opportunities. I’m sure he’s disappointed he didn’t get a goal himself but it was an excellent No 10 performance so I’m really pleased.”

Alli wasn’t alone in performing well for the hosts with Pierre-Emile Hojbjerg providing a goal and an assist in a performance that was more in keeping with his early-season form.

Spurs had 24 shots in this match, 13 of which were on target – both figures exceed any amount they had in a single Premier League match under previous manager Jose Mourinho.

The result keeps Tottenham’s hopes of qualifying for the Europa League in their own hands with Aston Villa at home and Leicester at the King Power Stadium their remaining games.

Mason added: “We needed to see a win first and foremost, but how you win is important. It’s important to get a certain feeling and I thought we were outstanding today. It could’ve and probably should’ve been more as we attacked well, dominated the game and defended well when we needed to. It was a very pleasing performance.”

“If Jose Mourinho doesn’t pick you, it doesn’t mean anything really. We saw what he did to Luke Shaw and look at the player he has turned into since he left. Jose seems to want to fall out with a lot of his players.

“Dele Alli is a quality player. He is 25 years of age, he averages nearly one [goal] in three games, and if you can’t get him in the team…

“We’ve also seen Gareth Bale’s form since Jose has gone and you think ‘this is a manager who has won everything, you can’t keep falling out with your players all the time’. The reason is, he likes to look at everyone else rather than himself.”

Nuno: We lacked discipline and organisation

Wolves were wasteful in front of goal, with Fabio Silva unable to convert any of his seven shots during a frustrating afternoon for the visitors. But the margin of defeat could well have been bigger.

The Wolves boss said: “The overall performance was not as good as we expected but we had good moments and I was disappointed with the way we conceded. At the end of the first half, we were open and disorganised. We allowed simple passes that breaked all the lines.

“We showed a good reaction in the second half without really testing [Hugo] Lloris. There were half chances.”

Nuno revealed that Daniel Podence will have surgery on a groin problem on Monday having not been involved in the matchday squad for the defeat. The Portuguese also confirmed that Raul Jimenez will seek a specialist this week as he steps up his rehabilitation.

Wolves remain in 13th place and can no longer finish in the top half of the table.

“We want to keep trying to improve and finding new solutions to our game. We were missing a lot of things. Not all the game but mainly on the moments when we conceded we were missing discipline and being aggressive to solve a simple situation.”