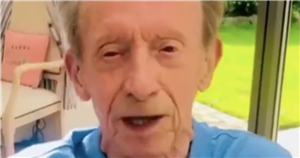 Manchester United legend Denis Law has thanked fans for their support in a touching video message following his Alzheimer's and dementia diagnosis.

Law, who scored 237 goals in 404 appearances for United and clinched the Ballon d'Or in 1964, announced last month that he is battling Alzheimer's and Vascular dementia.

The former striker is one of several ex-players to be diagnosed with dementia, following friends and ex-teammates such as Bobby Charlton, Nobby Stiles and Billy McNeill.

And after receiving "unbelievable" support over the past month, Law has released a video message via United to thank fans for their well wishes.

"Thank you everyone for the well wishes and support," he said.

"It's unbelievable. I really thank you very much."

Law revealed in his statement last month that his conditions has worsened to the point that he is no longer able to sign his own name, leaving him "frustrated, confused and worried."

Where do you rank Denis Law amongst the greatest Manchester United players ever? Let us know in the comments section below.

“You hope that it won’t happen to you, even make jokes about it whilst ignoring the early signs because you don’t want it to be true," the Scot said.

“You get angry, frustrated, confused and then worried, worried for your family, as they will be the ones dealing with it.

“However the time has come to tackle this head on, excuse the pun. I recognise how my brain is deteriorating and how my memory evades me when I don’t want it to and how this causes me distress in situations that are beyond my control.

“I do understand what is happening and that is why I want to address my situation now whilst I am able, because I know there will be days when I don’t understand and I hate the thought of that right now.

“In the height of the pandemic I said I hoped that if one positive was to come out of it, it would be that it would make people kinder to each other, so that’s what I am hoping for now."