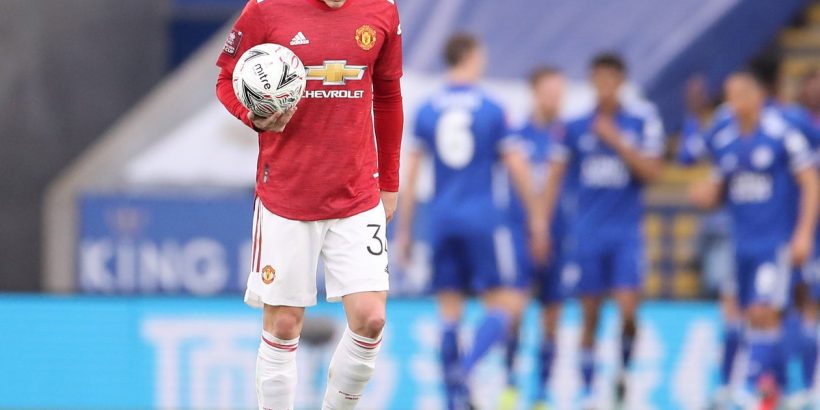 Donny van de Beek’s underwhelming debut season at Old Trafford could leave Manchester United pondering whether to quickly offload him and move on, according to former striker Mark Hughes.

The Dutch attacking midfielder arrived from Ajax in the summer but has largely been on the periphery under Ole Gunnar Solskjaer, with Bruno Fernandes the established starter in the No. 10 role and Van de Beek unable to earn himself a place deeper on the pitch, either.

He has barely played more than 300 minutes in the Premier League this season, with most of his game time coming in the domestic cups – such as his 64 minutes at the weekend in the FA Cup quarter-final defeat to Leicester City.

There, Van de Beek again failed to consistently impact on United’s performance – despite a moment of clever participation in their sole goal during the 3-1 loss – and Hughes says the midfielder is showing a mix of a lack of rhythm and a lack of understanding.

“Clearly it’s difficult, he hasn’t had enough game time and you can see that in his play,” Hughes told Stadium Astro.

“He’s wandering and not really getting on the ball, doesn’t know how to affect the game, can’t demand the ball of his team-mates because they’re not quite sure whether or not they have enough confidence in him.

“He looks like a guy who’s wandering around lost on the field.

United paid Ajax around £35 million to sign Van de Beek according to reports at the time, with a further £5m to come in add-ons.

But the club won’t hang onto him if he doesn’t show the form he’s capable of, in Hughes’ opinion, and despite a lack of game time it’s still down to the 23-year-old to seize the chances which do come his way and sway Solskjaer’s opinion.

“Since he’s come to United he hasn’t shown anything like what the level he needs to be at to remain a Man United player.

“He can only have so many opportunities, at some point he’s going to have to take them or United will move him on. I think they’re edging towards that decision if he’s not careful.”

Van de Beek has only made three appearances off the bench in the league since before Christmas, while he also sat out three of the four Europa League games against Real Sociedad and AC Milan through injury.

He could yet feature more in that competition, having played in all six Champions League group games earlier in the season, but league opportunities look like remaining thin on the ground across what is left of the 2020/21 campaign, during which Van de Beek has netted a single goal – which came on his debut.