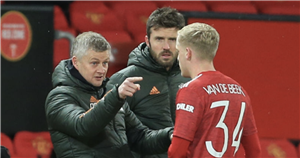 The Holland international has been left stunned after starting just two Premier League games this season under Ole Gunnar Solskjaer.

De Beek was one of United's flagship signings last summer after joining them from Ajax in a £35m deal.

But he has spent most of the season stuck on the sidelines after starting 11 games in total in all competitions, despite Paul Pogba missing chunks of the campaign through injuries.

De Beek, 23, fears he has no long term future with United and that he will have to find a new club this summer to kick-start his career.

Despite establishing himself in the Dutch national side, he is also worried his lack of game time will see him miss out on the Euros this summer.

He will hold showdown talks with executive vice chairman Ed Woodward before the end of the season in a bid to get answers as to why he has been largely ignored.

De Beek has been sidelined with a mystery injury for the last month, but could be available again for United's trip to AC Milan in the Europa League on Thursday.

It remains to be seen if Solskjaer will include him in his squad, with rumours swirling around Manchester that he never wanted to sign De Beek in the first place.

Despite his lack of action, De Beek will not be short of offers in the close season should both parties agree to cut their losses.