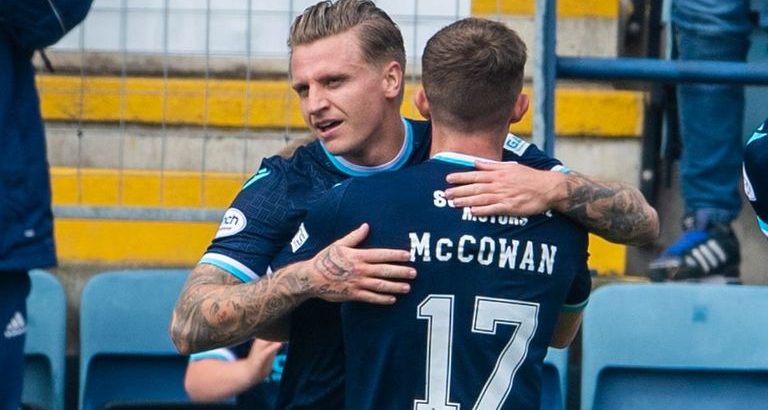 Match report as Paul McGowan comes off the bench to earn Dundee a 2-2 draw at home with Hibs; Jason Cummings had given the hosts an early lead, only for Martin Boyle to level for the visitors, before Ryan Porteous put them ahead 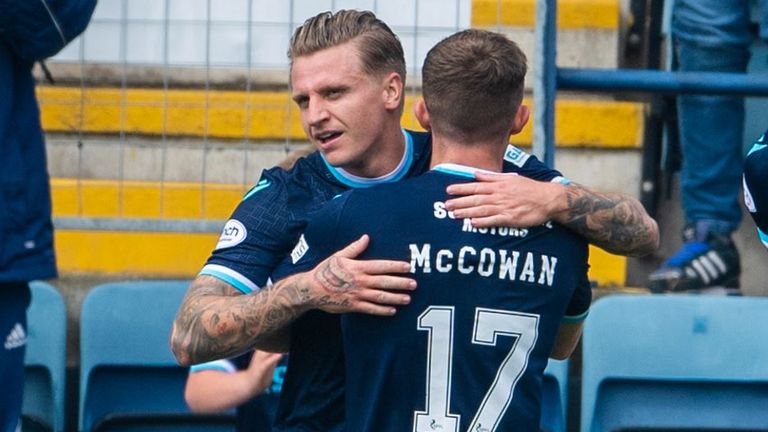 Substitute Paul McGowan headed a late equaliser for Dundee to salvage a point
from a 2-2 draw at home to Hibernian.

The Dark Blues took the lead early in the first half, with Jason Cummings netting against his former side.

Former Dundee player Martin Boyle equalised for Hibs from the penalty spot before the break.

The Edinburgh side edged in front in the second half thanks to a Ryan Porteous strike.

But McGowan came off the bench to earn the home side a share of the spoils when he struck six minutes from time.

Dundee announced before kick-off that two unnamed players had tested positive for Covid and were self-isolating.

Hibs were also without Scotland front man Kevin Nisbet, who is unwell, but new loan signing from Hull, striker James Scott, was handed a starting debut.

Dundee had the first big chance of the game in the sixth minute through skipper Charlie Adam who hit a rising 25-yard shot with Hibs keeper Matt Macey pulling off a superb one-handed acrobatic save to tip the ball over.

However, the home side did break the deadlock in the 11th minute when an Adam cross from the left made its way to Cummings who took a couple of deft touches to make room for himself before coolly slotting home past Macey.

The Hibs keeper then came to the rescue with another stunning save to deny Dundee a second as Paul McMullan tried his luck with a long-range effort.

The Edinburgh side had their first chance of the game in the 25th minute when Scott flicked on a Josh Doig cross but his effort flew just wide.

However, Hibs equalised in the 39th minute. Dundee’s Christie Elliott tripped Jamie Murphy and, although the initial challenge looked to be just outside the box, referee Alan Muir pointed to the spot.

Right on the stroke of half-time, the Dark Blues came close to taking the lead once more through a towering Lee Ashcroft header but Macey made another superb save.

Hibs took the lead in the 59th minute when Kyle Magennis whipped in a low corner in from the right and Porteous’ volley flew into the back of the net despite Legzdins getting a touch.

The Edinburgh men had chances to increase their lead but Dundee equalised in the 84th minute when McGowan ghosted in to nod home a Paul McMullan cross and secure a draw.

Dundee travel to Motherwell, while Hibs entertain Livingston, with both Scottish Premiership games kicking off at 3pm on Saturday.