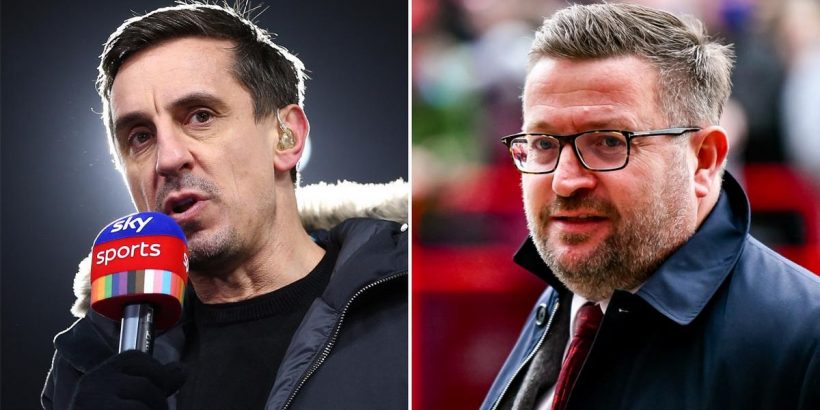 Manchester United's incoming chief executive Richard Arnold is said to be keen on building bridges with ex-players who have criticised the club – starting with Gary Neville.

Arnold is set to take over from the outgoing Ed Woodward on February 1, is said to want a smoother relationship with United legends, many of whom are prominent in the media.

Arnold, who is currently in the role of Group Managing Director, is said to have already reached out to Neville, with Paul Scholes expected to hold talks with him in the coming months.

Neville had been particularly critical of Woodward on the back of his failed European Super League plans last year, saying that he knew his time in football had come to an end.

The Athletic reports the news of contact between Arnold and Neville a week before his official change in role.

"Ed Woodward will step down from his role as Executive Vice-Chairman, also effective from 1st February 2022."

Will Man Utd finish inside the top four? Give us your thoughts in the comments section

With Arnold saying: “I am honoured to have the chance to serve this great club and its fans. I am determined to return that honour in any way I can.”

With Executive Co-Chairman Joel Glazer adding: "I would like to thank Ed for his tireless work on behalf of Manchester United during his nine years as Executive Vice-Chairman and 16 years with the club.

"We are now looking forward to Richard and his leadership team opening a new phase in the club’s evolution, with ambitious plans for investment in Old Trafford, the strengthening of our engagement with fans, and continued drive towards our most important objective – winning on the pitch.”

Neville had said of Woodward on Sky Sports: "We obviously don’t know why the timing is now.

"The leeches could’ve thrown him under the bus or it could’ve been the sensible thing has happened. Ed Woodward knew it would get hot in the kitchen and he had to get out of there.

"Every single executive who sits at the Premier League table, on these UEFA and FIFA committees, they need throwing out of that club. There is no way they can be trusted.

"Ed Woodward knew his time in football was finished. Ed Woodward is the trunk of the tree, we now need to go for the roots."