Edinson Cavani has trained with Manchester United for the first time since he joined the club on a free transfer.

The 33-year-old Uruguay international, who left Paris Saint-Germain at the end of June, signed a one-year deal earlier this month.

Cavani was required to undergo a mandatory two-week quarantine period following his arrival in the UK, which ruled him out of contention for Saturday’s 4-1 victory over Newcastle in the Premier League.

However, the forward was pictured in training alongside his new team-mates at Carrington on Sunday as United prepare to begin their Champions League campaign against Cavani’s former club in Paris on Tuesday, when he could make his debut. 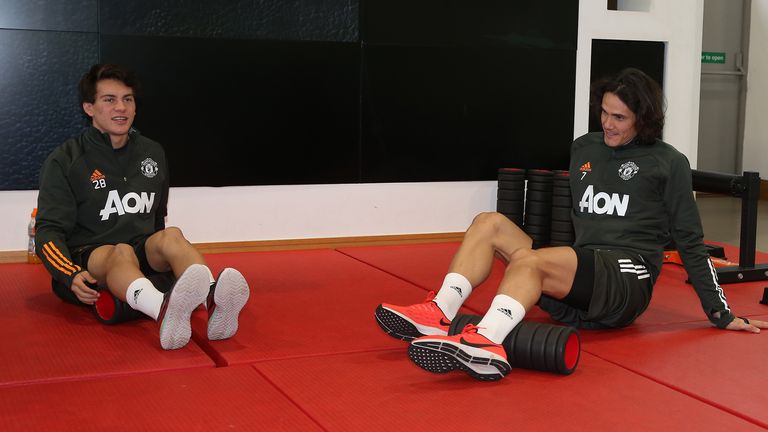 When his signing was announced, Cavani, who also previously played for Napoli and Palermo, spoke of his honour at the opportunity to play for United.

“Manchester United is one of the greatest clubs in the world, so it is a real honour to be here,” said Cavani. “I’ve worked really hard during the time off and I feel eager to compete and represent this incredible club.

“I have played in front of some of the most passionate supporters in football during my career and I know that it will be the same in Manchester. I cannot wait to experience the Old Trafford atmosphere, when it is safe for the fans to return.

“I look forward to continuing to write my little story inside the book of football and I know that’s why my focus has to remain the same as always – work, work, work. I have had a conversation with the manager and this has increased my desire to wear this beautiful shirt.” Cavani was one of four Deadline Day signings for United as the club also completed deals for Alex Telles, Facundo Pellistri and Amad Diallo.

He became PSG’s all-time record goalscorer with 200 goals in 301 games across all competitions and helped the club win six league titles during his seven-year stay in France.

Marcus Rashford is relishing the competition and quality Cavani will bring to Ole Gunnar Solskjaer’s squad at United.

“As a forward line [the arrival of Cavani] is something to look forward to,” he said. “Hopefully he comes in and scores goals, because he can definitely help us win games and points.

“He can be a massive player for us this season. To win two or three trophies in a season you need a squad, it’s not possible if you don’t have people who can score goals one week and the next week, it’s just not possible without three or four forwards in a team.

“Growing up, United always had four or five forwards who could score goals at any time. The closer we get to that, the more strength we’ll have.”