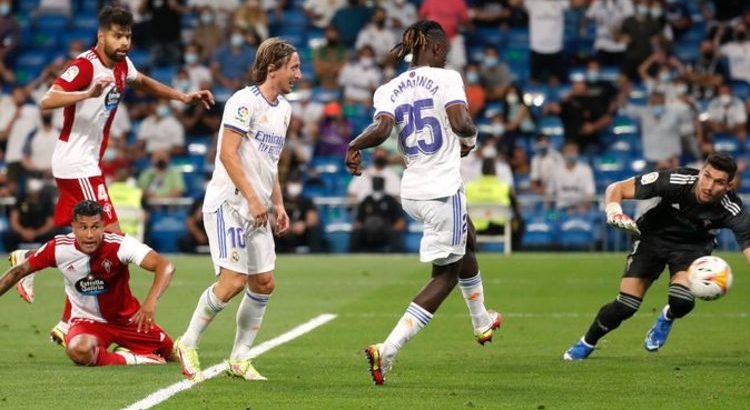 Manchester United were reminded of their summer transfer gamble this weekend when Eduardo Camavinga scored on his debut for Real Madrid. The Premier League giants were linked with a move for Camavinga after Paul Pogba entered the final year of his contract at Old Trafford.

United eventually opted against signing a new midfielder, having filled their priority positions with the signings of Jadon Sancho and Raphael Varane before Cristiano Ronaldo joined in the most sensational switch of the summer.

But there was a feeling among many that Ole Gunnar Solskjaer’s side should have also add to their engine room options, with West Ham’s Declan Rice believed to be on the club’s shortlist ahead of next summer.

Camavinga had entered the final year of his contract at Rennes, where he had starred for the past two seasons despite being just 18 years old.

That enabled Madrid to snap him up for £27million on the final day of the transfer window – and it could prove a bargain if his debut is a sign of things to come.

After he came off the bench to replace Eden Hazard, it took the teenager just eight minutes to score his first goal for Los Blancos in a 5-2 win over Celta Vigo on Sunday.

Camavinga is not known for his goalscoring prowess – with his strike at the Bernabeu equalling his tallies from each of his two seasons in Rennes’ first team.

But he showed he has more in his locker than his renowned passing range and ability to read the game from a deep-lying position.

And when Modric’s shot was saved by Matias Dituro, Camavinga showed quick reactions to pounce and fire the loose ball into an empty net.

Afterwards he was hailed by Karim Benzema, with Madrid’s hat-trick hero saying Camavinga “will bring a lot to the team”.

The teenager has previously said he is “inspired” by Pogba, and he has drawn comparisons with the World Cup winner – even from the man himself.

“He makes me think a bit about me,” said Pogba after the youngster made his debut for France.

“He has confidence in his qualities. He is a very good youngster, I like him enormously.”

Replacing Pogba may not be a pressing issue for United, despite the 28-year-old’s contract expiring next summer.

United’s 4-1 win over Newcastle on Saturday – inspired by a rampant Cristiano Ronaldo – is said to have swayed Pogba towards signing a new deal.

But while Nemanja Matic performed adequately in midfield alongside the France star, many feel United still need a top-class holding midfielder to protect the defence against teams with greater threat.

The need was apparent against Wolves when Adama Traore ripped through their midfield at will before the international break.

And it was on show again at times as Newcastle threatened on the counter-attack, with Javier Manquillo equalising on the break before United plundered three more to soar to the top of the table.

In Camavinga, Madrid will hope to have secured a player who can star in their midfield for the next decade.

And if their title challenge falls short, United could end up regretting not pursuing a move for the midfielder while his transfer value was comparatively low.