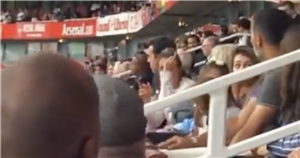 Arsenal technical director Edu's wife appeared to give the middle finger to an angry fan during the club's 2-0 Premier League defeat to Chelsea on Sunday.

The Gunners have endured a nightmare start to the new season, suffering back-to-back 2-0 defeats against Brentford on the opening day and Chelsea at the weekend.

Mikel Arteta's side find themselves second bottom of the table, above only Norwich, and face a daunting trip to the Etihad to take on Manchester City next Saturday.

Tensions are understandably running high among the Arsenal fanbase, but one fan overstepped the mark at the Emirates on Sunday.

Frustrated at the team's performance, the supporter took it upon himself to shout at the former midfielder as he watched the game with his family.

The fan made his feelings abundantly clear to Edu, who ignored the man before a woman believed to be his wife gestured with one of her fingers as the supporter walked away.

The incident was another unsavoury moment on a difficult afternoon in north London, with Arteta's side suffering the embarrassment of being booed off after their second defeat in as many matches.

Edu's daughter Maria Gasper has also been feeling the ill effects of Arsenal's poor form and has pleaded with fans to stop sending her abusive messages on social media.

Where do you think Arsenal will finish this season? Let us know in the comments section.

"I know about his potential. I'm not here to talk about that. But sometimes, reading this stuff, it hurts a lot.

"But we have to get used to this life, right. In life there are ups and downs."

"My father has been on this life for a while, from criticism to praise, he's used to it but I am not. It hurts a lot, but we will learn [to get used to it]."

"Everyday, I used to answer people on DMs, and some have asked why I stopped doing so.

"I can't open my DM's anymore because it's full of abuse, I don't have a lot of patience. "My head is not right at the moment to explain why they're abusing my father."

Arteta was also targeted by Arsenal fans following the 2-0 loss to Chelsea as he was confronted in his car as he left the Emirates.