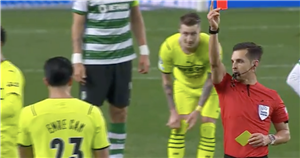 Borussia Dortmund were knocked out of the Champions League in the penultimate fixture of the group stages on Wednesday evening after two Pedro Goncalves goals and a red card for Emre Can.

Dortmund, who were very well placed to qualify after winning their opening two fixtures in the competition, lost their third successive game as Sporting joined Ajax in qualifying.

Goncalves gave the hosts the lead following a defensive blunder after half an hour, adding a second just nine minutes later with a rocket from outside the box.

With Dortmund desperately needing two goals to secure a point, Can was involved in a clash with Pedro Porro after he refused to kick the ball out of play despite Jude Bellingham's intention of doing so.

Goncalves then aggressively shoved the former Liverpool midfielder before captain Marco Reus intervened, with Can seemingly keeping his cool despite a history of sendings off.

Replays showed that Can kicked out at Porro following a late challenge after he refused to kick the ball out of play, with the former Manchester City loanee then going to ground.

Can could then be spotted standing on the ankle of his opponent while trying to pick him up, ending Dortmund's chances of a comeback despite Donyell Malen's consolation after Porro himself had found the net.

Was Emre Can's red card fair? Tell us in the comments section

Captain Reus spoke honestly about the poor performance, admitting that the task was made impossible after they were reduced to 10 men.

He said: "We are constantly discussing the same mistakes. So it's getting harder and harder to recover from those moments. We play better with 10 men tonight.

"I don't want to discuss individual mistakes because we weren't good enough as a team. Without a doubt, mistakes like those that led to goals are frustrating.

"We tried to go over Sporting, but then we invited them into the game. That made fans support them. It's a horrible night. We are out and this is a harsh reality, we have to accept it.

"It's hard to explain what's wrong, there were a lot of ups and downs in a short period of time. In the Champions League you cannot lose three matches in a row, and if that happens, you don't deserve to advance.”

In more positive news for Dortmund and manager Marco Rose, they sit just one point behind Bundesliga leaders Bayern Munich after 12 fixtures as they look to end their nine-year title dominance.