A match that Poland had creditably turned into a battle ended with an explosion, the substitute scoring a stoppage-time equaliser to make it 1-1 and ensure Gareth Southgate’s side had failed to win a qualifying game for the first time since October 2019.

They probably didn’t deserve any more than that, because they could rarely rise above an abrasive Polish side.

In what was a mostly uninspired performance, Harry Kane offered the individual brilliance that looked like it was going to win England game, only for Paulo Sousa’s time to force their way back into it. Robert Lewandowski meanwhile matched Kane, albeit with supply rather than the finish.

Questions will be asked about the defending for that final moment, as Jordan Pickford’s supreme defensive record this year was dented a little more, as well as Southgate’s refusal to make a substitution.

Poland were more than willing to leave a few dents in the opposition.

The home side were really putting it up to England, and Kamil Glik was getting in everyone’s face. It was as if he had made it his mission to aggravate every single opposition player. A face-off with Kyle Walker – where Glik seemed to pinch the defender’s neck – eventually flared into a full square-off in the middle of the pitch, with referee Daniel Siebert eventually booking Glik and Harry Maguire. It was conspicuous that Kane left a little in later on.

That followed on from a bit of edge around the game, as admittedly warm applause for the English national anthem was bookended by boos at the start and then boos for the players taking the knee. The latter was as loud as in Budapest.

Poland’s approach did have the effect of stifling England. Southgate’s side didn’t even have a shot on target in the first half.

The closest they came was one Kane header, that you probably would have backed him to score at his best. It instead marked his fourth big miss in three games, but then that’s the thing about him. Such moments don’t seem to have any effect. Kane does not seem affected by any doubt whatsoever. 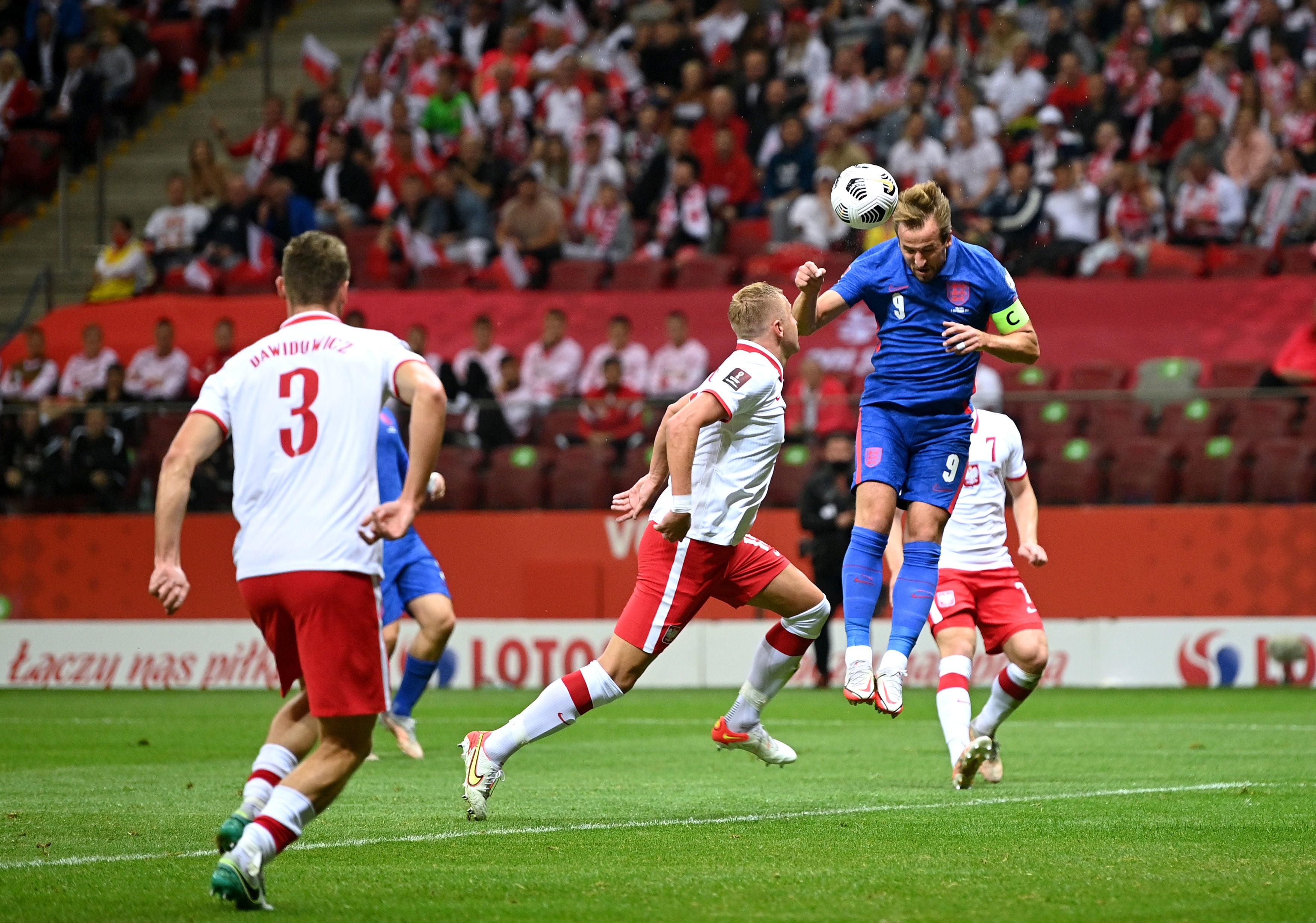 The same could be said of the man he is so often compared to. Lewandowski is just affected by playing with a weaker international team. The Bayern Munich striker so often had to toil to lift the level of his side. He just did it superbly fro that final moment.

It meant Maguire had to work very hard to keep up with him, and the forward’s sheer movement fashioned a half-chance out of a nothing moment. Jordan Pickford did well to block. Later on in the game, when England were enjoying more possession, Lewandowski reminded them they couldn’t get too adventurous because he suddenly surged forward with a shot from distance.

Jack Grealish was the only England player really making things happen, but it was an indication of Poland’s approach that he at one point had to dribble right across their backline before attempting a ball in.

In the one first-half moment when a gap appeared, after a poor ball out of defence, Kalvin Phillips’s ball was too slow and probably the wrong choice. He went for Raheem Sterling, when Kane was in more space over the side. The move ended with the ball rebounding off another Polish body.

Paulo Sousa’s side had succeeded in making the game a battle, disrupting England’s play. This was summed up by how most of Grealish’s running was actually tackling back and chasing. There were the tank traps of Polish tackles everywhere, if also a few more abrasive attempts at challenges. One of them led to a free-kick that saw Maguire hit the post with a header, as he powerfully met Luke Shaw’s cross.

Poland were making it so awkward that England really required a flash of inspiration, some individual brilliance.

Kane, after what had been a relatively quiet game for him, suddenly silenced the crowd. Some were doubtless in awe. It was a brilliant, swerving strike, probably made all the sweeter for him in how he beat an Arsenal goalkeeper. 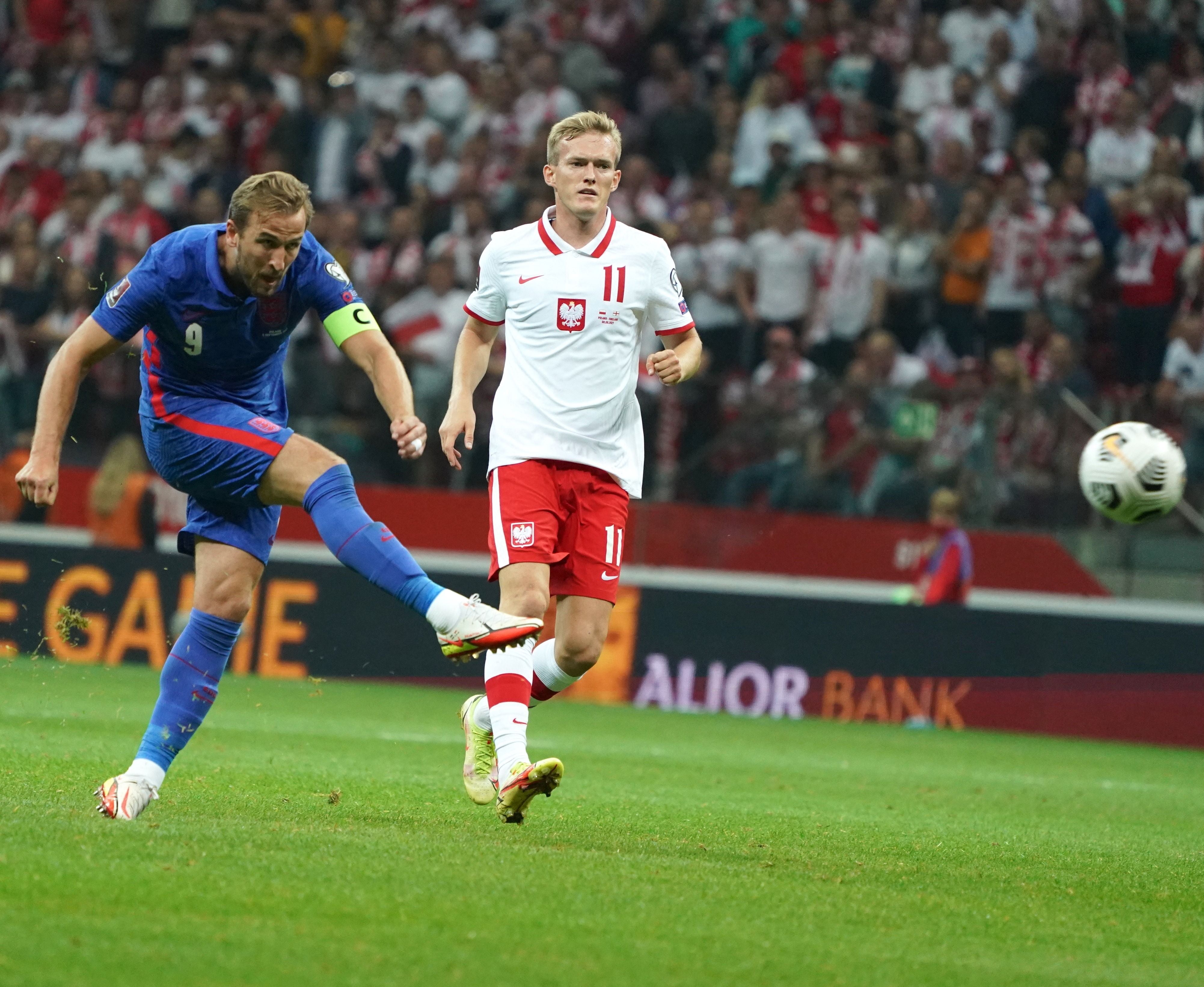 While it initially looked like Szczesny had been poor for it, his view had been blocked by Jan Bednarek, the ball swerving over the defender’s head and into the far corner.

That should have been it but Poland refused to give in.

It didn’t stay silent for long. There was already a loud warning when Pickford kicked the ball against Karol Swiderski, to almost give up a farcical equaliser.

Poland were just getting warmed up.

Lewandowski was left to float in a deliciously inviting ball and there was Damian Szymanski to finish.

England’s path to Qatar, much like the stadium, was suddenly that bit less serene.