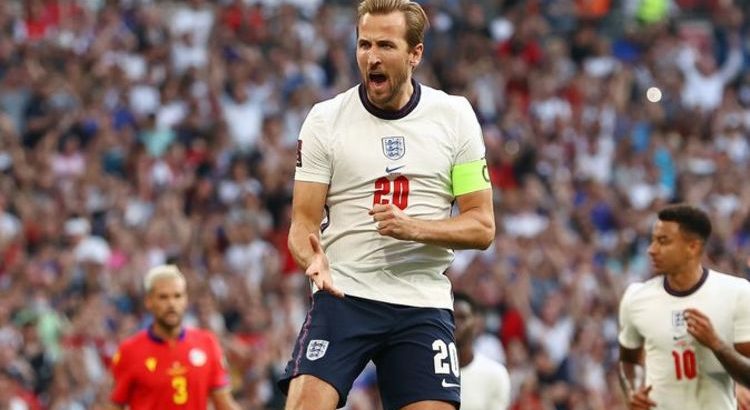 Gareth Southgate admits he cannot imagine Harry Kane not breaking Wayne Rooney’s goalscoring record after seeing his desperation to be let loose on Andorra. The England captain was rested for the match on Sunday but came on in the 62nd minute with the Three Lions struggling to add to the one goal Jesse Lingard managed in the first half.

Within 10 minutes he had converted a penalty to move on to 40 goals alongside Michael Owen, a tally it took the Liverpool, Real Madrid and Manchester United star 89 caps to compile.

This was only Kane’s 62nd appearance and leaves just Jimmy Greaves, 44, Gary Lineker, 48, Sir Bobby Charlton, 49, and Rooney on 53 as the players above him.

And Southgate revealed Kane is desperate to climb as high as he can.

“The only insight I can give you is that when I suggested putting him on against Andorra he was stood by my side about three-and-a-half seconds later with his tracksuit top off and his tie-ups on, and he was ready,” the England manager said.

“He is certainly on track to break Rooney’s record. Let’s hope he stays fit. If he plays the games, I don’t see that record not being broken.”

Joe Gomez has meanwhile been promised a return to the England fold when the time is right as Southgate continues to keep an eye on Tammy Abraham and Fikayo Tomori.

The 24-year-old Liverpool defender picked up a knee injury while on international duty last November and is only just feeling his way back to full fitness.

His only involvement this season has been to come on for the final minute of the win against Burnley at Anfield last month.

But Southgate said: “We kept in contact with Joe throughout his rehab. But we would be very cautious about when we put Joe back in.

“The rehab from that injury is a really important one to get right, he needs to be settled in with Liverpool with plenty of minutes on the pitch feeling in a good place with all of that before we start thinking of selecting him.

“But he’s a boy we think a lot of and it’s good to see him close and available for selection which is great.

“And the other two boys, we are mindful of players that just because they leave the Premier League it doesn’t mean they are out of our thoughts.

“Fikayo we have been monitoring very closely throughout his time at Milan and we will do the same with Tammy.

“It’s of course early stages for Tammy at Roma and the league is a different sort of challenge.

“But good for him, he needs to be playing. It’s brave to take that new adventure on and I’m sure it’s one he can succeed at.”