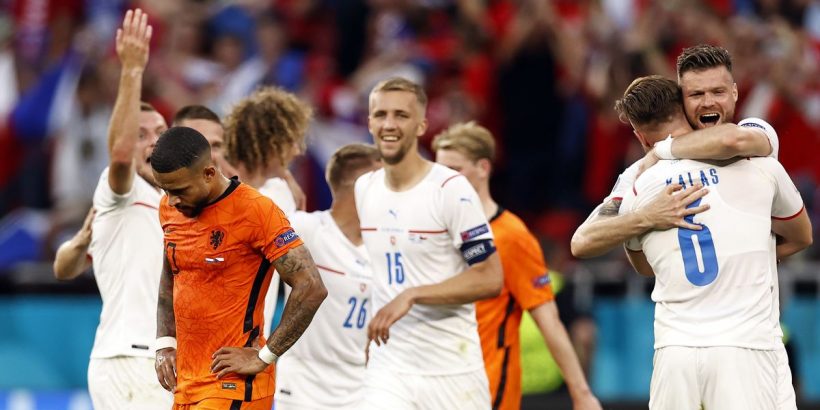 England fans are dreaming of making the final of Euro 2020 after Holland beat the Czech Republic to completely open up the Three Lions' side of the draw.

Gareth Southgate's side face Germany in the last-16 at Wembley on Tuesday with the winner going through to a quarter-final against Ukraine or Sweden in Rome on July 3.

The winner of that tie will now face either Denmark or Czech Republic in the semi-final, offering England a potentially easier route to the final than if the Dutch had won in the last-16.

Frank de Boer's men had been expected to beat the Czech Republic and would likely have started favourites in a quarter-final with Denmark.

But goals from Tomas Holes and Patrick Schick ended Holland's tournament prematurely – and gave England fans hope of a dream run to the final of Euro 2020.

One fan wrote: "Well #ENGGER is going to be massive. Safe to say the winner should realistically reach the final. What a huge game on Tuesday. Dare I say football's coming home."

Another person said: "Netherlands knocked out. England’s run to the final becomes easier. Beat Germany and no excuses to not make the final."

Do you think England will beat Germany on Tuesday night? Let us know in the comments section.

Someone else claimed England's last-16 tie with Netherlands was their biggest match since 1966, commenting: "Tuesday night has got to be England’s biggest night since 1996?

"Netherlands, the hardest team they would face after Germany in the lead up to the final, are out. MASSIVE opportunity for Gareth Southgate and the squad."

While a fourth supporter added: "If England beat Germany we definitely should reach the final now. Netherlands were the only other big side on that side of the draw!!!"

England host Germany at Wembley at 5pm on Tuesday night, with the winner travelling to Rome for a quarter-final with Sweden or Ukraine on July 3.