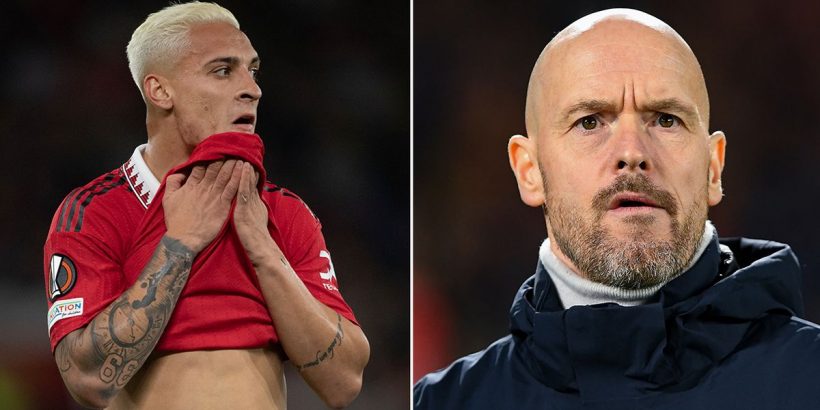 Erik ten Hag has piled in on criticism of Manchester United winger Antony by claiming he “can do better”.

The Brazilian joined from Ajax for a whopping £86million last summer. But after an impressive first few games, the 22-year-old trickster has failed to be as effective for the Red Devils and has not scored or notched an assist since October.

Ten Hag has now come to the defence of the man he coached for two years at Ajax, but admitted there is plenty of room for improvement.

Speaking ahead of the EFL Cup semi-final first leg win against Nottingham Forest, the Dutchman said: "He can do better, I see space for improvement. For instance, and I think also you know this, we want him to be more direct and be more involved.

"But, as I said, the team is performing better if he is on the pitch. That's a good thing, that's a good base to build further. I think he has already made an improvement.

Do you think Antony will be a flop at Man Utd? Let us know in the comments section below

"But I think with his capabilities, with his talents, he can do even more. But as I said, I think he has made a [good] contribution in the team."

Antony was criticised by some pundits earlier this season for attempting unnecessary skills during matches. He also failed to be effective against Arsenal in United’s last league fixture, where he was taken off by Ten Hag.

United legend Gary Neville said on his podcast after the game: "I want to see a little bit more from Antony, to be honest with you. £90million signing. It's just not quite happening for him at this moment in time.”