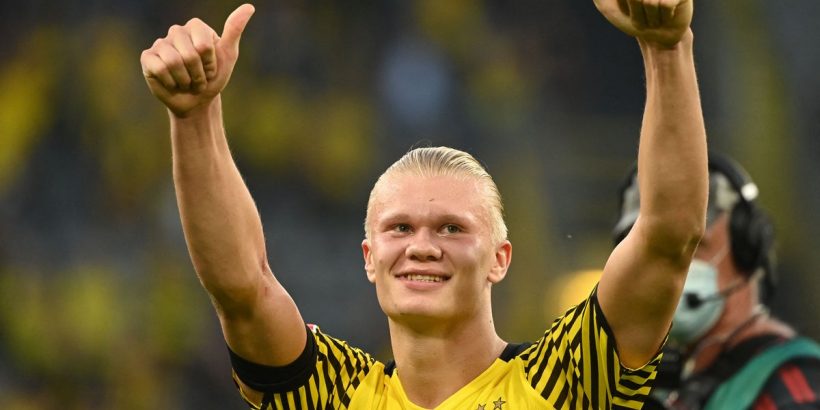 The Norwegian already has five Bundesliga goals this season after scoring 27 times during the 2020-21 season.

Yet ahead of Dortmund’s Champions League opener against Besiktas, Rose has suggested the 21-year-old can still improve.

“He’s an excellent player, we all know that,” Rose said before Wednesday’s Group C fixture against Besiktas. “[He is] a player who knows he still has potential for development.

“I think he’s a young player who can, of course, still gain experience at the absolute top level, who has to learn to deal with resistance with certain things.”

Dortmund have begun the season with three wins from four games but sit third in the German top division after a surprise defeat to SC Freiburg.

Haaland scored twice last weekend as Rose’s side thrice came from behind to edge an exciting encounter with Bayer Leverkusen 4-3.

Erling Braut Haaland scored twice, including from the penalty spot, against Bayer Leverkusen

But despite a remarkable goal scoring record since arriving at the club from RB Salzburg, Rose thinks that there are still aspects of his game that the striker must work on.

“In terms of heading, [Haaland] showed at the weekend at Leverkusen that he’s working on that too and scored a beautiful header.”

Dortmund open their Champions League campaign with a trip to Turkey under new manager Rose, who joined the club from Borussia Monchengladbach this summer.

Ajax and Sporting Lisbon have also been drawn in Group C.