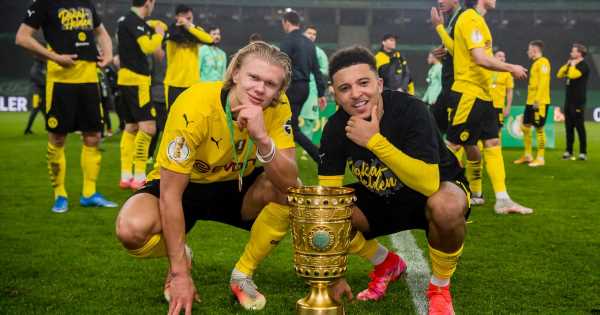 Erling Haaland has reacted to Jadon Sancho's pending transfer to Manchester United as Chelsea ramp up their own efforts.

It comes as the announcement confirming the Englishman's arrival at Old Trafford comes at any moment now.

Sancho completed his medical this week after United and Borussia Dortmund agreed on a £73m fee over the Euros.

With the tournament now over, the Red Devils are ploughing ahead with their transfer plans – which also include Raphael Varane and Eduardo Camavinga.

Sancho has long been targeted by United, with Ole Gunnar Solskjaer desperate to prise him away from the Bundesliga after a failed move last summer.

But he finally has his man – much to the detriment of Haaland – who was often the keen receiver of his passes and helped him score 41 times in 41 matches last season.

The duo became close at the Signal Iduna Park over the year and a half they had played together.

And the Norway international has admitted he has been left upset by the news that Sancho is set to leave him behind and move to Old Trafford.

"Me and Jadon understood each other very well and he's a top player," he said.

"So of course it's sad that he goes but that's how it is and that's football. You never know what will happen.

"But I think that there's a lot of other good players that I have a good tone with and it can become even better.

"We have to see who I match the best with."

It comes as Chelsea's own pursuit to sign Haaland continues to drag on with the latest news insisting that the Blues are fighting a losing battle.

Thomas Tuchel is desperate to sign a striker but the Leeds-born ace's latest comments indicate that a move will not happen.

Who should Erling Haaland sign for next? Have your say in the comments below

"I talked a little bit with him and I know him from before because I had him for six months at Salzburg,” Haaland added.

"He's a nice guy and I look forward to working with him.

"I heard the training sessions are hard here so it's exactly the same as it was at Salzburg. Hard training and a lot of running.

"That's what I expect the tactics to be, to press a lot and run a lot and attack a lot."