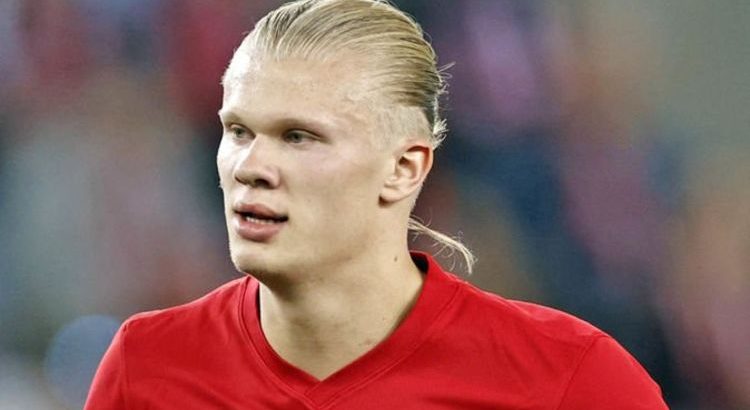 Manchester United may have just re-signed Cristiano Ronaldo, but they still want to secure the arrival of Erling Haaland next summer. And what works in their favour is that, speaking last year, the Borussia Dortmund hitman admitted he’d love to meet the Portugal international. What a strike-force they would be…

Manchester United are well-stocked when it comes to strikers at present.

Ronaldo’s Hollywood return to the club has generated mass excitement, with supporters hoping he’ll be able to pick up from where he left off.

United also have Edinson Cavani still on their books, with the veteran opting to extend his stay with the club back in May.

Mason Greenwood is evolving spectacularly, having scored three goals in as many Premier League appearances so far this term.

And Anthony Martial could be rejuvenated after recently notching for France against Ukraine during the international break.

However, while that’s the case, United still plan to strengthen.

And it’s Haaland who both Ole Gunnar Solskjaer and John Murtough have identified as their leading target for next summer.

It’s certainly easy to see why, with the Borussia Dortmund marksman one of the deadliest players in world football.

And while Ronaldo could represent an obstacle, the Portugal international could actually help swing the transfer pendulum their way.

Speaking in 2020, Haaland admitted he’d love to meet Ronaldo in person – having grown up idolising the 36-year-old.

He told Record: “I would love to meet him and tell him that I am a footballer thanks to him.

“For me, he was always a role model.”

Haaland hasn’t been able to meet Ronaldo yet, with their paths failing to cross.

But if the Norway international moves to Old Trafford, they could become partners in crime in Solskjaer’s attack.

And that, certainly, would strike fear into defences both in the Premier League and in the wider world.

As for Ronaldo, he name-dropped Haaland earlier in the year when talking about players who can make the difference in the coming years.

“It is hard to choose just one player to say this one will be the best,” he said.

“But I think it is exciting to see this new generation of young players, like Erling Haaland and Kylian Mbappe, who are coming through.

“Some players can have one or two great seasons, the really great players are the ones that keep doing it season after season, and that is not so easy to do.

“It takes a lot of hard work, and a lot of commitment.”

Meanwhile, Solskjaer revealed earlier this year that he was ‘still in touch’ with Haaland.

“When you have had kids and players through as a coach, you follow them and I keep in touch with Erling,” he said.

“It’s great to see him become the player he has become and [how] he works to improve all the time.

“He’s a Dortmund player – we just wish him well there and let’s see what life will bring later on.

“You know I can’t speak about Erling because he’s at Borussia Dortmund, and it’s disrespectful to talk too much about it, apart from that I know him and I speak to him.

“Everybody would say you would take the best players in the world and Erling is a top player.”