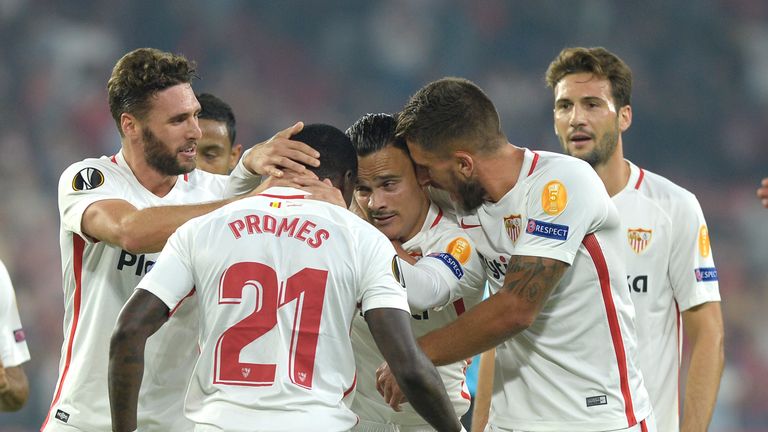 A round-up of all Thursday’s night’s Europa League action as Sevilla hit six, and Real Betis see off AC Milan.

Standard Liege and Krasnador are also on six points after the Belgian side’s 2-1 win with it all to play for at the halfway stage.

Real Betis claimed top spot of Group F at the halfway stage with a 2-1 win at AC Milan. The Spanish team prevailed thanks to goals either side of half-time from Toni Sanabria and Giovani Lo Celso, with Milan, who had Samu Castillejo sent off late on, getting one back from Patrick Cutrone. 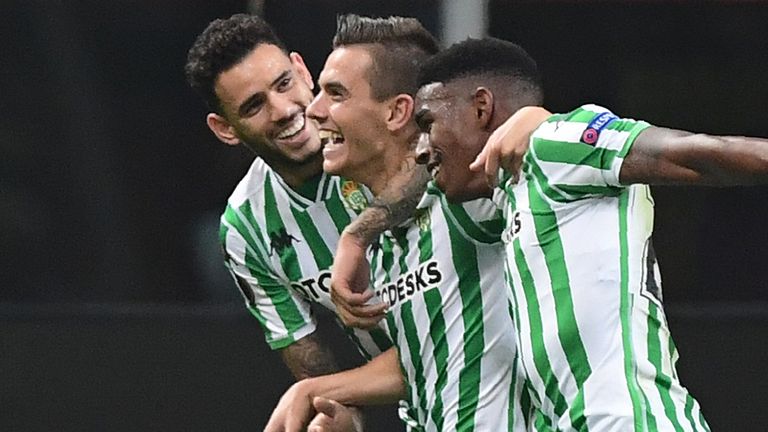 Danny Welbeck scored the only goal of the game as Arsenal beat Sporting Lisbon to extend their winning streak to 11 games. In Group E’s other game Vorskla Poltava beat Qarabag 1-0.

FC Zurich came from behind to beat Bayer Leverkusen 3-2 and maintain their 100 per cent record in Group A. AEK Larnaca and Ludogrets drew the group’s other game 1-1.

Salzburg and Leipzig are in a strong position in Group B. The Austrian side trounced Rosenborg 3-0 while Leipzig ran out 2-0 winners over Celtic.

Zenit St Petersburg scored an 85th-minute winner to beat Bordeaux and go top of Group C, ahead of Slavia Prague, who were 1-0 winners at FC Copenhagen.

Dinamo Zagreb’s 2-1 win at Spartak Trnava preserved their 100 per cent record in Group D, with Anderlecht and Fenerbahce drawing 2-2 in the other game.

Frankfurt took control of Group H with a 2-0 win over Apollon Limassol, sitting three points clear of Lazio. The Serie A side beat Marseille 3-1 in France thanks to goals from Wallace, Felipe Caicedo and Adam Marusic and are a good bet to qualify for the knockout stages.

Genk were 4-2 winners of Besiktas in Group I, with Sarpsborg drawing 1-1 with Malmo while in Group K, Jablonec and Astana drew 1-1 and Dynamo Kiev won 2-1 in Rennes.