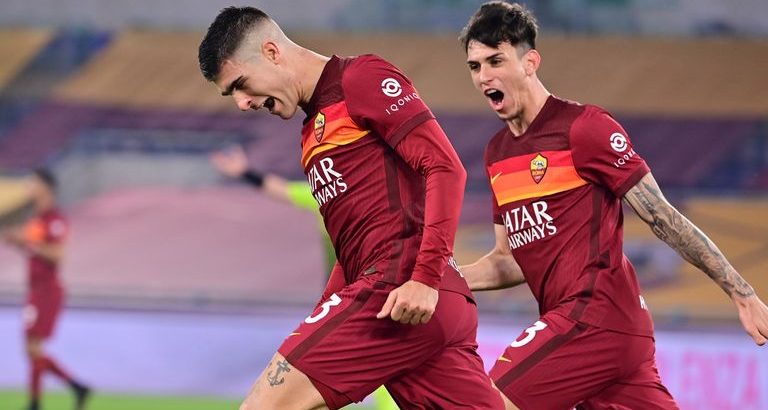 Lorenzo Pellegrini’s deflected shot put the hosts in front at half-time, but Inter mustered a spirited response and Milan Skriniar headed in a deserved equaliser after the break.

Achraf Hakimi put Inter ahead by curling an outstanding shot in off the bar, but Mancini’s glancing header levelled the scores with four minutes remaining.

Inter are in second place on 37 points, three behind city rivals AC Milan, with Roma third on 34 points.

Tiemoue Bakayoko headed a last-gasp winner as Napoli snatched a 2-1 victory at Udinese to climb to fifth in the standings.

VAR came to the visitors’ aid early on after a blatant foul on Hirving Lozano in the penalty area was missed by the on-field officials, with the referee awarding a spot-kick converted by Lorenzo Insigne in the 15th minute.

The hosts were much the better side, however, and equalised through Kevin Lasagna, who capitalised on an underhit back pass from Amir Rrahmani before slotting home in the 27th minute.

Udinese continued to offer more attacking threat in the second half, but against the run of play Bakayoko, on loan from Chelsea, popped up with a 90th-minute header to send Napoli fifth.

Elsewhere, Lazio piled more misery on Parma, who dropped to 19th after a 2-0 home defeat which kept their visitors in eighth, while Verona kept up their bright start to the campaign with a 2-1 win over Crotone, who are now bottom of the table. The promoted club from southern Spain were coming off two consecutive draws and three losses, but Alex Fernandez put the hosts ahead in the 15th minute.

Joselu equalised for Alaves from the penalty spot in the 23rd before Anthony Lozano netted in the 56th and Alvaro Negredo added to the lead the 68th.

Alves, also winless in their past three matches in all competitions, had defender Alberto Tachi Rodrguez sent off with a second yellow card shortly after half-time.

Atletico Madrid remained top the table despite their game against Athletic Bilbao on Saturday being postponed because of heavy snow in the Spanish capital.

Jos Luis Morales scored a goal and set up another as Levante rallied in the second half to defeat Eibar 2-1.

Veteran Japanese midfielder Takashi Inui put the visitors ahead in the 51st but Morales set up Gonzalo Melero’s equaliser in the 65th and scored the winner in the 76th.

Visitors VfB Stuttgart cruised past 10-man Augsburg 4-1 to secure a first win in four Bundesliga matches and climb to 10th. Stuttgart, who had not won since thrashing Borussia Dortmund 5-1 last month and had lost their last two matches, took a 2-0 lead with goals from Nicolas Gonzalez and Silas Wamangituka.

Marco Richter cut the deficit for hosts Augsburg a minute after the restart but Gonzalo Castro volleyed in at the far post to restore Stuttgart’s two-goal cushion just past the hour.

To make matters worse for Augsburg, Richter was sent off in the 77th minute following his second booking in the space of four minutes.

Substitute Daniel Didavi slid in at the far post to seal Stuttgart’s victory and they leapfrogged Augsburg into 10th place on 21 points. Augsburg dropped to 11th on 19.

Bayern Munich top the table on 33 points despite their 3-2 loss at Borussia Moenchengladbach, with second-placed RB Leipzig on 31 following their 3-1 defeat by Dortmund.