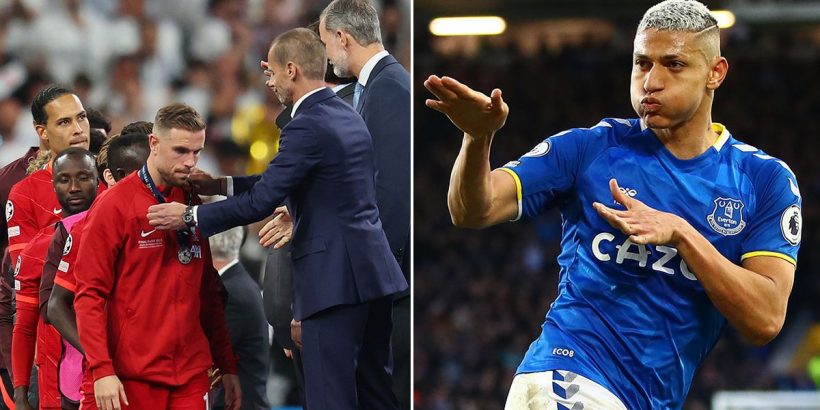 Everton hero Richarlison wasted no time in mocking rivals Liverpool for their Champions League final defeat at the hands of Real Madrid by posting a meme on Twitter to leave fans in stitches.

Fresh off the back of securing Premier League safety in the penultimate game of the season, half of Merseyside will have been left delighted by the success of Carlo Ancelotti's side over Jurgen Klopp's misfiring men in Paris.

Using an earlier social media joke about Liverpool fans missing out on a chance to go to France after their coach failed to arrive, Richarlison knew exactly how to get his fans laughing.

Earlier in the day, rumours over a fake coach driver named 'Richard Arlison' being the reason for the Liverpool fans being left stranded in their bid to head to Paris.

After a Liverpool fan posted details of themselves and their group having to head home after their coach to Paris failed to arrival, an alleged Companies House page appeared on Twitter with Mr Richard Arlison named as a person with significant control.

However, the real Coach Innovations Limited page, which was created in 2006 had been doctored by a sneaky fan, with Richard Arlison, of course a pun on Richarlison, nowhere to be seen on the official site.

Where will Liverpool and Everton finish in the Premier League next season? Give us your thoughts in the comments section. That didn't stop Richarlison from posting the same mocked up image of himself as a coach driver on Twitter to his 716,000 followers – bringing in 222 thousand likes in half and hour.

With a second adding: "Complete and utter s***housery from the master!"

Real Madrid were crowned kings of Europe for the 14th time with their 1-0 Champions League final win over a heartbroken Liverpool – with Vinicius Jr scoring the only goal.

Thibaut Courtois was unquestionably the man of the match as Mohamed Salah failed to beat the former Chelsea stopper with a string of chances as they were foiled in their bid to win a seventh European crown.