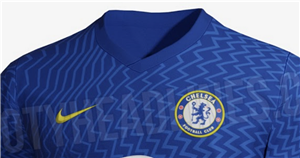 Premier League teams could look very different in the 2021/22 season as leaked shirts start to get revealed.

England’s top-flight teams are starting to put plans in place for the next season with most teams having less than 10 games to go.

It has seen most talk turn to who will be the new faces, with names such as Kylian Mbappe and Erling Haaland being thrown around.

But there has also been speculation about how each English top-flight side will be walking out, with kits starting to get leaked.

The Red Devils look set to be sporting their famous red kit in the Champions League as the best of the rest behind Manchester City.

Hoping to build on their strong form, it may see them stick to a similar kit that has been provided by Adidas as part of their £75m-a-year deal.

The three stripes on the shoulders could change from white to red while the graphic elements are removed. The Blues’s resurgence under Thomas Tuchel has made them stand out with an unbeaten run.

And their strip for the 2021/22 season will make sure they continue to do that, with a bold design of jagged lines on the home kit.

But a bright yellow line has been added to the edges as well as Nike sponsor and surrounding the Stamford Bridge side’s badge.

Or is it gold, a statement for their title intent?

Jurgen Klopp’s side rarely make changes to their famous strip – and the 2021/22 season is unlikely to be any different.

Still sporting their Nike logo and liver bird crest, the only changes are pink edges to the sleeves instead of green and white.

While a lightning-esque series of lines can be seen across the shirt.

Many of the Anfield faithful will be hoping for a return of their lightning-fast counter-attacking style with Mohamed Salah and Sadio Mane is the shirt.

Spurs are still in contention for a place in the European competitions next season, potentially sporting their colours in full.

Instead of having the blue sash on the shoulders, the leaked strip shows the whole shirt in white.

But a closer look shows a floral pattern on the edge of the body, combining with their blue shorts and socks.

Mikel Arteta’s side also get their kit from Adidas – and are set for a couple of minor changes.

While the famous red dominance and white strip remains, the three lines on the Gunners' shoulders could be blue instead of white.

But it is not the same deep red as this season, opting for the lighter colour seen in the 2018/19 campaign at the Emirates Stadium.