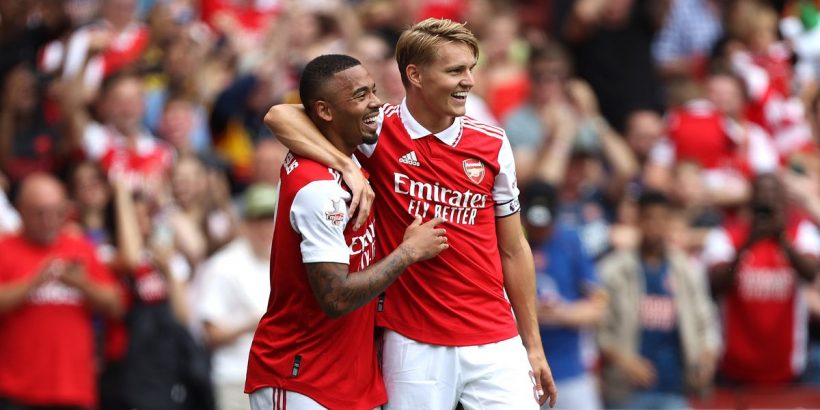 As the new Premier League season kicks off, we can reveal the secrets of the strips for fans!

TV body language star Judi James believes each soccer team’s kit can give clues into the psyche of the side.

Here she analyses each of the top club’s shirts for the 2022/23 season and gives the Daily Star exclusive insights into how they might affect the squad’s performance on the pitch.

Which Premier League kit is your favourite? Let us know in the comments section.

What: Adidas shirt is red with white sleeves and zig zag pattern on the collar.

Judi says: “The solid red torso gives feelings of strength and invincibility although the new white collar and lightning flashes look cute rather than clobbering from a distance."

What: Umbro’s jersey has jagged black and red stripes.

What: Umbro shirt keeps the classic red and white stripes.

Judi says: “This pegs Brentford as the continuity candidates of the league. If it ain’t broke don’t fix it seems to be their motivational motto, but will it be enough to inspire the squad?”

What: Nike’s shirt is white with a central blue and stripe, with blue shoulders and yellow detailing.

Judi says: “Fresh, upbeat and the yellow trim adds power and status with a vibe that says we are here to stay.”

What: Nike’s all blue shirt has a patterned white and turquoise collar.

Judi says: “A simpler, cool and confident style here, with the solid blue only lifted by a subtly-patterned edging round the neck, suggesting both focus and a touch of flair.”

What: The Macron jersey has brushstroke red and white stripes.

Judi says: “The diagonal stripes suggest winners’ sashes and while the new childlike scribble design might suggest messy play – it could actually have the effect of putting the fun into it.”

What: Hummel’s shirt is solid blue with white detailing.

What: Adidas shirt is white with black detail and wavy red lines on collar.

Judi says: “The solid white looks confident and emphatic, while the red wavy lines have the effect of brain waves which might put tactics uppermost in their minds.”

What: Adidas shirt is with minimal blue and white detailing.

Judi says: “Muted and low-key, there does seem to have been more emphasis on the texture and fabric, which would suggest thoughtful work behind the scenes and the potential for surprises.”

What: Adidas shirt is blue with white collar and detailing.

Judi says: “The focus is towards the neck and shoulders, with the white collar and stripes, meaning they’re pushing a mentally focused, calm and decisive form of play and counting on experience.”

What: Nike’s shirt is plain red without graphics or trim and just the logos in white.

Judi says: “This is an uncompromisingly design, suggesting strong determination. Simple kits like this can help define purpose and identity better than anything flashy or complex.”

What: Puma’s sky-blue shirt has a maroon trim and club badge at the centre.

Judi says: “This is all about hoops – suggesting continuity and smooth, play. The mod vibe though suggests swagger and a desire to challenge.”

Judi says: “The pie-crust crimping effect on the collar is a cool nod to the past and could channel the glory days again, while encouraging some fancy finishes.”

Judi says: “This edition of the classic style gives off a ‘gatekeeper vibe’ to rivals, hopefully inspiring strong defence and warding off the opposition. It has a warrior vibe too.”

What: Macron’s sold red shirt has subtle Trent Bridge graphics on the sleeves.

Judi says: “Red is the colour of courage and strong emotions, but the graphics also speak of a pride in their roots and the bridge design suggests strength against the oncoming tide.”

What: Hummel’s white shirt, with geometric pattern has a central red stripe and black lines.

Judi says: “Bold and flamboyant, this suggests a team willing to teak risks but also has as the look of something inspired by the emergency services. Expect the odd mishap perhaps?”

What: Nike’s jersey is white with a neon and strip on the black collar and sleeves.

Judi says: “The white always emphasises athletic skills, but the neon addition sends a message that they are hoping to dazzle with some flair this season.”

What: Umbro’s top is claret with graphic stripes in white and blue on the sleeves.

Judi says: “This has a gladiatorial look to it and widens the shoulders, like padding to suggest solid physical strength and power. Gritty determination this season then.”

What: Castore’s shirt is mainly gold with black and white detailing.

Judi says: “The colours suggest energy, optimism and self-belief, with a slightly Star Trek sci-fi feel that suggests they hope to be taking things to another dimension this season.”