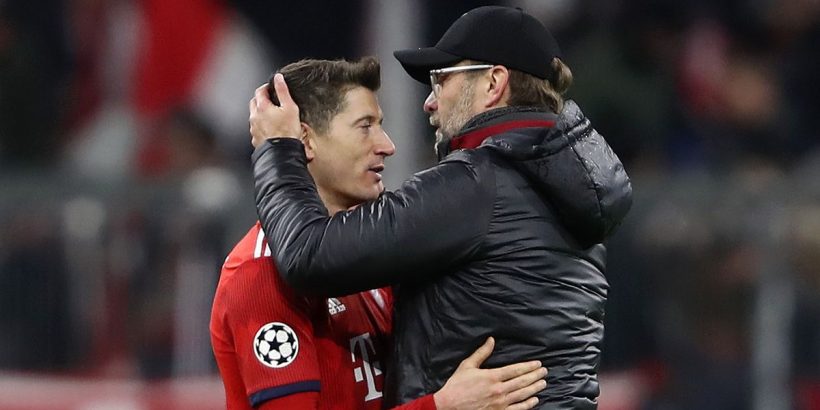 Those are just 11 of the words Bayern Munich striker Robert Lewandowski has used to describe Liverpool boss Jurgen Klopp during their time together at Borussia Dortmund.

Klopp managed Lewandowski for four seasons at Westfalenstadion, turning him from a promising young striker to one of Europe's most lethal marksman.

The 33-year-old hasn't looked back since his days playing in front of the Yellow Wall, scoring over 300 goals at a rate of almost one every match following his move to Bayern.

His union with the Bundesliga's biggest club has lasted seven trophy-filled seasons, but all good things must come to an end, and Lewandowski looks set to move onto pastures new next summer after revealing his desire to play for another top European club.

Liverpool, managed by Klopp, are one of the teams in the driving seat for Lewandowski's signature if he moves on from the Allianz Arena.

Daily Star Sport take a look back at everything the Polish plunderer has said about his former boss as speculation over his future continues to ramp up.

"Jurgen was not only a father figure to me," Lewandowski told The Player’s Tribune when discussing the current Liverpool boss. "As a coach, he was like the ‘bad’ teacher. And I mean that in the best sense of the word.

Do you think Liverpool will sign Robert Lewandowski next summer? Let us know in the comments section.

"He was not content to let you be a B student, you know? Jurgen wanted A+ students. He didn’t want it for him. He wanted it for you. He taught me so much. When I arrived at Dortmund, I wanted to do everything quickly: strong pass, one touch only. Jürgen showed me to calm down — to take two touches if necessary.

"It was totally against my nature, but soon I was scoring more goals. When I had that down, he challenged me to speed it up again. One touch. BANG. Goal. He slowed me down to speed me up. It sounds simple, but it was genius, really."

"The first three months at Dortmund were difficult. But I still know exactly when the situation got better," Lewandowski told Goal.

"We lost an away game in the Champions League in Marseille. At the time, I didn't really know what my position was with the coach.

"After this conversation everything worked better. We won the next game 4-0 against Augsburg, I scored a hat-trick and got an assist."

Lewandowski told ESPN: "I think Jurgen Klopp [is my favourite] and after that Pep Guardiola. 100 per cent.

"[Klopp] has two faces. You can see that he is kind of like a father, but the second part is like a coach, a manager.

"He can tell you everything – and I'm not speaking about the good things – about the bad things.

"Also for [players], he is a huge motivation. He makes this perfect, because he knows where there is this line where he can [push you] more or a little bit less.

"His performance as a coach is amazing, but not only as a coach but also as a man."

"Obviously Jurgen wasn't my dad, but in different ways he sort of adopted that role. He was one of the main factors behind my development and he opened the door to the big wide world of football for me."

"He's got charisma and knows how to create the right atmosphere in a team. On top of that, he's able to find the right balance between fun and more serious criticism. He's a coach you'd run through fire for."

Speaking to UEFA's website in 2019, Lewandowski gushed: "He [Klopp] made a huge impact on my career. I have to be thankful to him because of what we did together at [Borussia] Dortmund.

"We grew together and it's led me to where I am today. He's a great coach and a great person. I learned a lot from him. "He released that striker's instinct in me and that allowed me to make the next step up. I didn't know that I still had so much potential, more than I thought, and that means he saw something in me that I couldn't see.

His words and his body language resonate, even when he's in the dugout. If the game's not going well and you see his reaction it wakes up the team and sometimes you personally, and then you're willing to run and get stuck in.

"He loves the game, he loves being in the dressing room before the game. You see he's ready to put 100% into the game."