Ex-Everton forward Kevin Mirallas’ transfer to Turkey has to be the most bizarre transfer unveiling of transfer deadline day. The Belgian forward’s move to Super Lig side Gaziantep FK was confirmed today. With 94 goals in nearly 500 club appearances, the 33-year-old will bring a lot of experience to the 16th-placed side.

But his arrival in west Turkey was marked in a bizarre way by Gaziantep on their Twitter channel.

Mirallas’ transfer from Belgian side Royal Antwerp was confirmed on Monday afternoon with a poster showing three shots of the forward celebrating in Everton’s famous blue.

One of the shots, though, is of former team-mate Morgan Schneiderlin, who played with the winger for two years at Goodison Park.

The post has since been deleted by Gaziantep’s media team – but they continued to show off their new signing with images of him in their home strip. 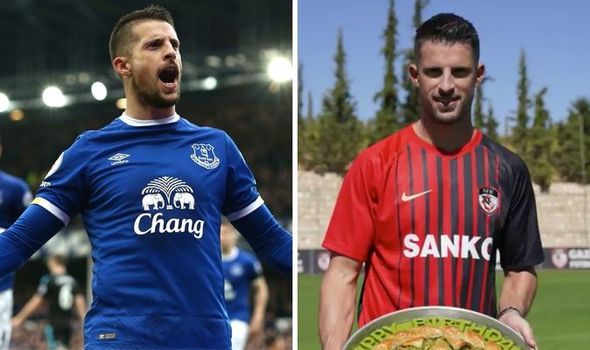 Transfer deadline day, though, is the same date as Mirallas’ birthday.

And the Turkish side decided to mark it by having the Belgian pose for the camera with a huge baklava cake.

The dessert is made up of layers of filo pastry while held together with syrup, seen in green for the 33-year-old’s arrival as it read “Happy Birthday Mirallas”.

This will mark the end of the Super Lig side’s business for the transfer window as their deadline falls on the same day as the Premier League’s close of business. 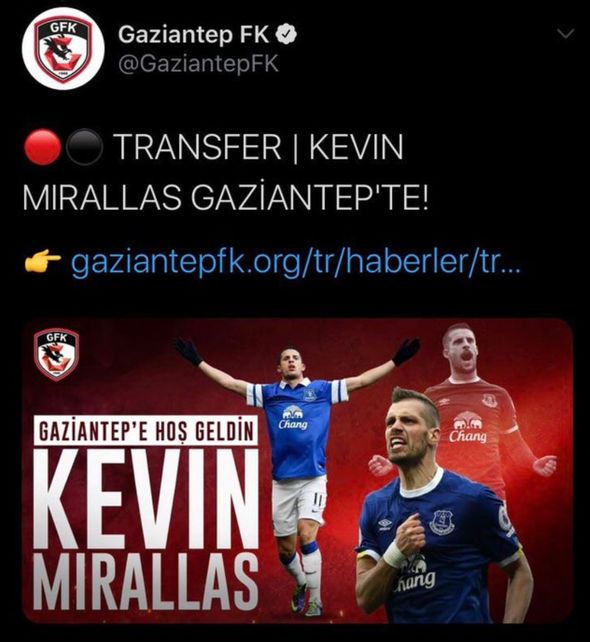 While Mirallas’ arrival was full of events, his former side – top of the table with four straight wins – have been busy today, signing defender Ben Godfrey from Norwich.

Meanwhile, Everton have also been linked with a move for Crystal Palace winger Wilfried but Clinton Morrison is unsure if such a deal will happen.

“For Zaha himself, and I don’t think Palace fans will mind me saying that, he would probably want to go to a bigger club than Crystal Palace,” Morrison told Sky Sports.

“You look at it with Wilf and say ‘where is he going to go?’. Everyone has kind of done their business. I was thinking maybe there was a lot of talk about him going to Everton. 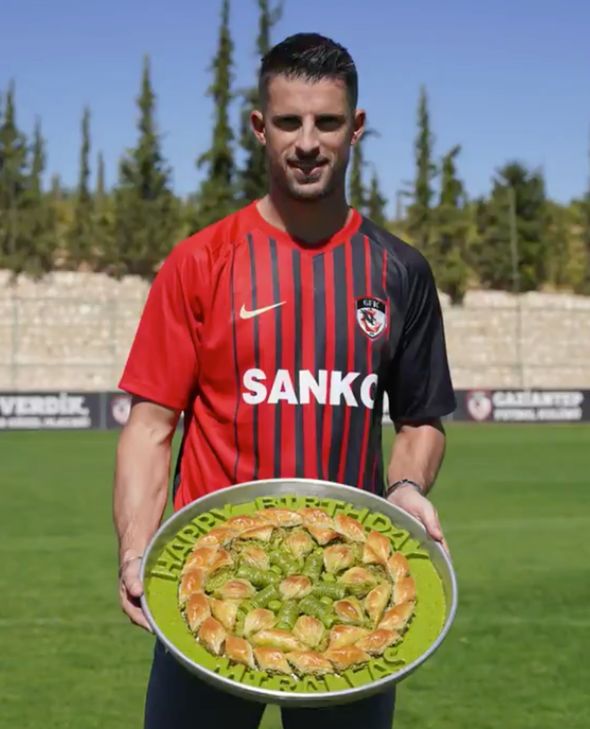 “But Everton have spent big money in the summer and they have just brought in Ben Godrey from Norwich, so is there money to go and get Zaha?

The Toffees could still have some activity before the deadline, though, as they could send two players out on loan for the remainder of the 2020/21 campaign.

While Carlo Ancelotti has been in contact with Manchester United and Tottenham over competition for goalkeeper Jordan Pickford.