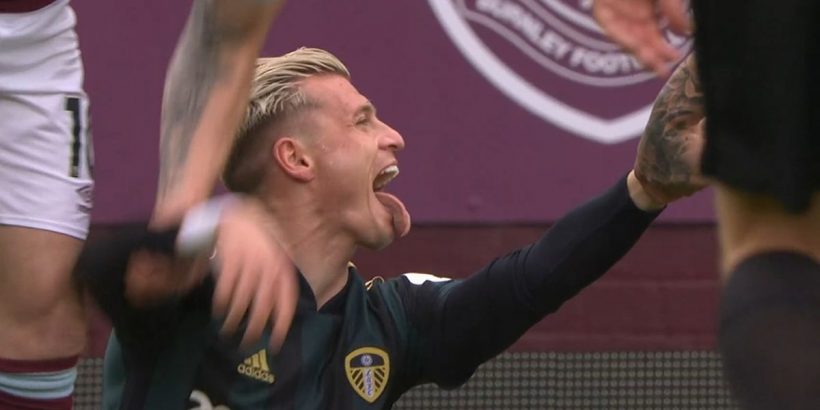 Ezgjan Alioski could face an FA probe into his gestures towards Dwight McNeil after being reported by Burnley.

Burnley reported Alioski to referee Graham Scott and the FA will study his findings and make enquiries before deciding if there are grounds to charge the Leeds defender.

Alioski and McNeil clashed in the second half of Leeds’ 4-0 win at Turf Moor and the Burnley winger said something to the Leeds left-back as he lay on the ground after he had fouled him.

Alioski stuck out his tongue as he was helped to his feet before he put his hands behind his ears and appeared to blow a raspberry towards McNeil.

Clarets boss Sean Dyche asked the fourth official Anthony Taylor to call Scott over to the touchline to allow one of his players to make a complaint against the North Macedonian international.

“There is a report, which has gone into the referee, and that will be passed on to the FA,” said Dyche. “One of our players made the report. I was a witness to the report, not the incident.”

The FA will now decide if there are sufficient grounds to take the matter any further.

Marcelo Bielsa was called over by Taylor to be informed of Burnley’s complaint and the Leeds boss claimed he did not see an offensive gesture.

“If there was a gesture, I didn’t see it,” he said. “In front of me I saw a dispute. I didn’t think it was too different to what happens in games.”

Alioski, 29, is set to leave Leeds on a Bosman after four years at Elland Road when the season finishes on Sunday.