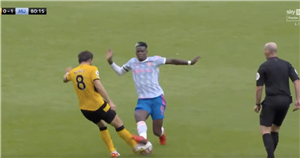 Football fans have been left fuming after Manchester United's winning goal against Wolves was allowed to stand, despite a 'red card tackle' from Paul Pogba that Graeme Souness called a "leg-breaker."

Mason Greenwood scored the winner late in the second-half with an arrowed strike that somehow found its way past Wolves goalkeeper Jose Sa.

As the United youngster wheeled off in celebration, Wolves players surrounded Mike Dean to complain about a foul on Ruben Neves by Paul Pogba in the build-up.

Replays showed that Frenchman did indeed catch the Portuguese midfielder with his studs, although Pogba denied any contact with Neves after the match.

The goal was allowed to stand, but fans were up in arms about the tackle on social media and complained that the former Juventus man should have been sent off.

One fan wrote: "Pogba’s tackle?? Xhaka got a red card for almost a similar tackle by the way."

Someone else said: "That was a red card tackle by Pogba let alone no foul. Just that the player wasn't crying on the floor. Make it make sense."

Do you think Pogba's tackle deserved a red card? Let us know in the comments section.

A third supporter commented: "That was a Pogba foul and red card for me. Worst than Xhaka’s."

"Pogba is not in control anywhere in that tackle, it is a terrible tackle…borderline red if we are being honest," was the view of a United fan who though Pogba should have received his marching orders.

While a fifth Twitter user added: "That's a straight red for Pogba."

He said: "I didn’t touch him. This is the Premier League, it was a 50-50, every weekend that is happening.

"We win the ball and we scored."

Graeme Souness, who earlier in the afternoon praised Pogba for his impressive start to the season, also thought it was a foul and called the tackle a "leg-breaker."

"The best angle is when we're looking straight at it. Pogba doesn't make any, any, any contact with the ball whatsoever.

"If we slow it down we'll see he makes contact with the shin and the shinguard.

"Bad touch, goes away from him and he doesn't make any contact with the ball, so how is it not a foul?

"Watch how high Paul Pogba's foot is here," Souness added as he was shown a replay of the challenge.

"He doesn't make any contact with the ball here and look at the referee's position – I just don't see how he doesn't see it. He got away with one.

"Whether Neves goes down immediately or doesn't go down, that is immaterial," Souness continued after a heated debate with his Sky Sports colleagues.

"Any of us, any player that has ever played the game, standing two yards from that challenge tells you that is a dangerous challenge."

Despite Neves' protestations, the goal was allowed to stand and United went on to win the game 1-0 as Ole Gunnar Solskjaer's side moved up to third in the Premier League table.

Tottenham will enter the international break top of the pile after they maintained their 100 per cent start to the season with a 1-0 victory over Watford.