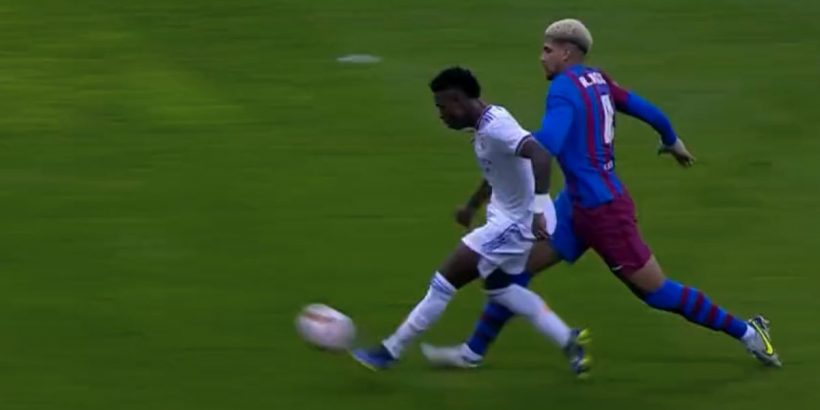 Vinicius Jr's opening goal for Real Madrid against Barcelona on Wednesday had fans in agreement over Sergio Busquets and Dani Alves.

The Brazilian winger exhibited his devastating pace and improved finishing ability to capitalise on a pair of mistakes from Busquets and Alves before scoring his 15th goal of the season.

Busquets was dispossessed in the middle of the park before Alves was left trailing in the wake of his opponent as Vinicius sped beyond him to score.

Barca were able to pull themselves back level before the interval, with Dutch striker Luuk de Jong bagging an equaliser with just four minutes remaining in the first half.

Fans were quick to point out Busquets and Alves' involvements in the goal, with the duo being labelled "done" following their errors.

At 33 and 38, respectively, the duo are veteran members of what has been seen as an ageing Barca squad compared to previous years.

Fellow Barcelona stalwart Gerard Pique was also singled out for being another member of the side who is now some way beyond his prime years.

Should Sergio Busquets and Dani Alves still be playing for Barcelona in 2022? Let us know in the comments section below.

One fan tweeted: "Busquets dispossessed and Vinicius sprints beyond Dani Alves. The last of Pep team is all but done."

Meanwhile, another wrote: "That's on Busquets and Alves. Busquets nowhere near alert enough to Benzema's press and Alves is out of position so Vini gets a free run into the half-space and you're never gonna catch him."

A third Barca fan: "Xavi playing a high line with Busquets, Pique and Alves. This isn't 2011."

Alves only returned to Barca in November after signing for the financially-stricken Spanish giants on a free transfer over five years after leaving.

After finally being registered at the start of this month he made his second debut for the club in the Copa del Rey and has played every minute since.