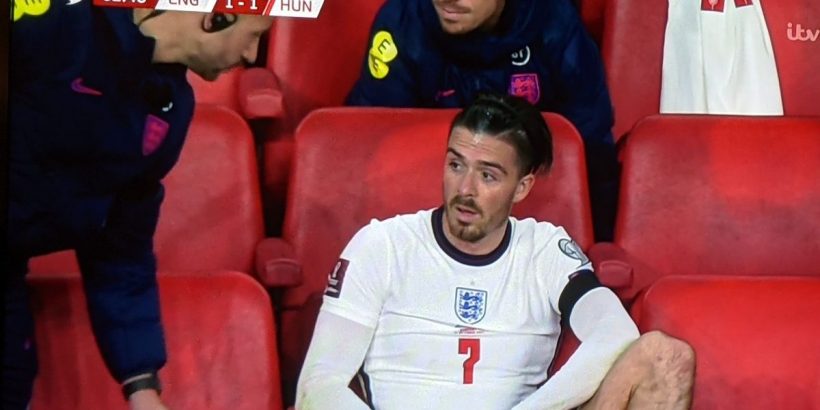 Jack Grealish's angry reaction to being substituted by Gareth Southgate for England against Hungary was quick to be spotted by fans watching at home.

Grealish had been handed a start by Southgate at Wembley after scoring against Andorra at the weekend and was a lively presence in the attack.

England were looking to take the lead in the game after conceding first and then equalising but Grealish was brought off in the 62nd minute in the first change of the match.

After being replaced by Bukayo Saka, the Manchester City star took his place on the bench and shook his head at the decision before putting it in his hands.

On the change, Gary Lineker said: "Southgate brings on Saka for Grealish, who was comfortably the best player on the pitch."

A supporter replied to the presenter: "Totally agree. Bizarre decision. Grealish thought the same looking at his reaction."

One fan tweeted: "Grealish’s reaction at being substituted when he was by far England’s best player when he was on the pitch shows exactly what a ridiculous management decision it was by Southgate.

"Very poor substitution in a game England should be winning. Killed the game off for the team."

What are your thoughts on Southgate's decision? Let us know in the comments section.

"I'm not surprised Grealish is p***ed off," another added. "He's been our best player going forward tonight and is subbed because he was the last into the team? Sterling and Kane have been terrible but remain on the pitch."

Sterling and Kane were taken off 14 minutes later with Tammy Abraham and Jordan Henderson coming on.

But neither of the three changes helped to turn the game around as the visitors held on for a point in the World Cup qualifier.

Former Chelsea striker Abraham was forced off with an injury in stoppage time with fellow striker Ollie Watkins taking his place late on.

The lacklustre draw leaves England with six wins from their eight games so far and they still top Group I as an unbeaten side on 20 points.

They still have to face Albania, the current third-placed team, at home and minnows San Marino away, with qualification almost secured.