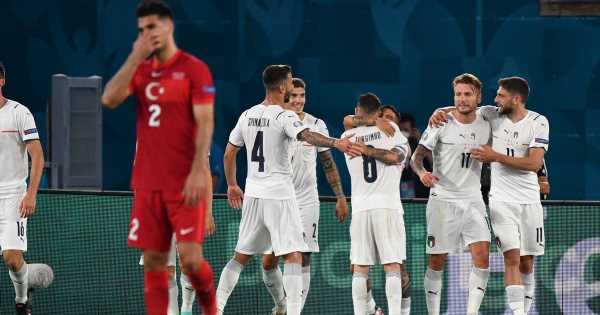 Fans who tipped Turkey as 'dark horses' for Euro 2020 are eating humble pie after Italy ran riot in the tournament's opening match.

Turkey, who are ranked 29th in the world, were considered by many to be outsiders for the European Championship this summer.

But any fans who put their name to Senol Gunes' side before Friday's opener have been left reconsidering their predictions.

Despite currying favour with plenty of neutrals, Turkey couldn't land a blow in the Stadio Olimpico, going down 3-0 to hosts Italy.

Mischievous Twitter users were quick to rinse those who had put faith in Turkey, posting a series of memes mocking their failure.

While another added: "So what happens now to all the hipsters who tipped turkey as dark horses having never seen any of their players?"

Others used videos to mock those who tipped Turkey as the tournament's dark horses.

Italy were good value for their win, dominating all of the key statistics and managing 24 shots to Turkey's four.

The hosts had to wait until the second half to find the breakthrough when Merih Demiral put through his own net.

Ciro Immobile added a second just over 10 minutes later before Lorenzo Insigne made sure of the result by making it 3-0.

Turkey now have a mountain to climb if they want to make it through to the knockout stages of the tournament.

READ MORE:Euro 2020 stars punching above their weight with WAGs from Harry Maguire to Luka Modric